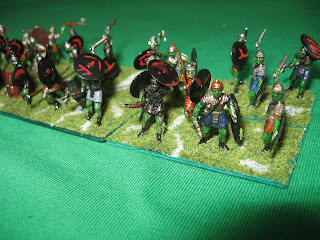 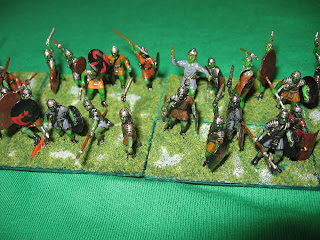 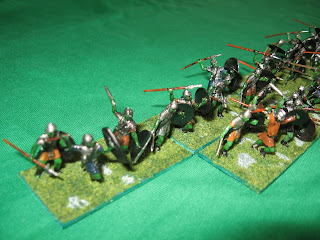 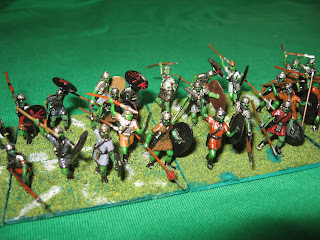 ...classed as Hordes for HOTT, Auxilia for DBA, and Light Infantry Skirmishers for WMA.

As stated previously, the vast majority these started 'life' as Esci Romans (although the more observant of you will spot the odd old Airfix figure), at a time when, well, the Esci Romans and Barbarians (and the occasional box of Revell Praetorians and Celts, if you could get them) was pretty much it when it came to Ancients. 20mm Fantasy? Forget it!

So, upon reading a Practical Wargamer article about Middle Earth HOTT with plastics, where it was suggested to paint Romans green, well, that was what I did.

However, I was conscious that they'd still look like Romans painted green, so I cut out all of their Balteus or Cingulum Militare (you know, those dingle dangle things in front of their groins), and for about half of them I cut off bits and pieces (or in some cases, all) of their Lorica Segmentata.

Their shields are drawing pins, minus the pins (the shield patterns were just some random strokes of the brush!) and the weapons are a selection of chopped down (or not) 15mm pikes and halberds.

I also cut off their bases and stuck them to thin balsa wood, so they'd at least look a little shorter than their EIR counterparts which are based (whole) on 3mm MDF bases.

I also did the same, but more so, to their Bow and Psiloi/Skirmishers. 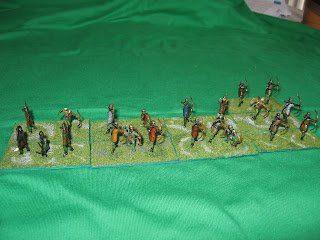 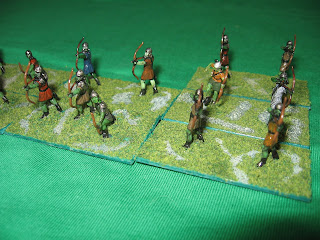 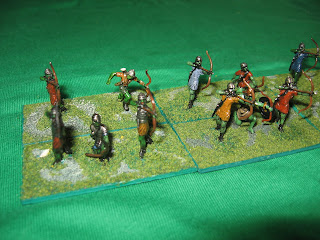 As for painting these greenskins, well, I chose a limited palette of browns, blues and greys, then doused them in PVA with a little black mixed in. Gave them a good dirty, grimy, un-Romanish look.