Opps, I just accidentally deleted this post in an effort to delete, well, this draft...

So, sorry, but I do believe that I've just also deleted everyone's comments!

While I procrastinate over the dishes, here's another thing I prepared earlier... 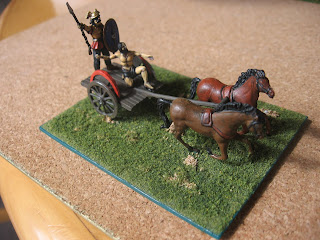 While I have been pottering away with the Romans (and Skellies), I've had this on the back burner, applying a bit of paint here and there while working on the other stuff.

It's your basic Airfix Ancient British chariot with some 15mm ACW artillery wheels, an Esci Barbarian driver and an Italeri Gaul...dude...and the chariot sides from a New Line 20mm chariot which I never did get round to building. 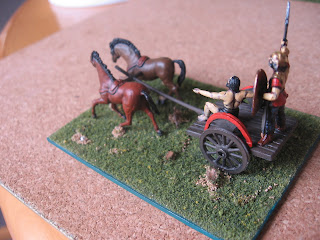 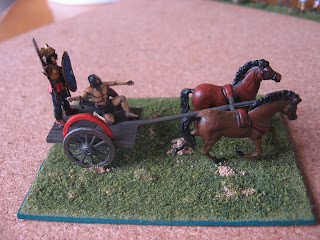 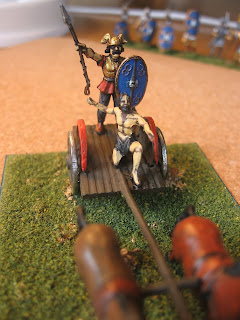 This one makes number 17 or so, but the bulk of the others are just stock standard 'cept the wheels, all having been replaced thusly. (I built up the army during my DBM infatuation. Can anyone say 'Ancient British Panzer Corp'?).

Nick
Posted by Nick Grant at 20:03 No comments:

Just before I settle down to write the second part of last night's battle report, I thought I'd take a quick few pickies of the Early Imperial Roman Warmaster Ancients Praetorian Infantry unit that I've just completed. 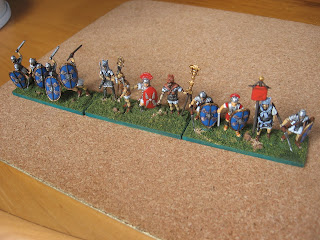 Simply Esci EIR's with Italeri Republican Roman shields. Apparently the Praetorians looked pretty much like regular grunts but with oval shields, aka this...

So cool, I thought, I can do this. I plowed through my left overs (hence the Airfix figures - and the one Esci standard bearer that was chopped off his base. He was too tall otherwise...), asked Stan if he had any shields left over from his Italeri Republican Roman figures, and 9 months later... 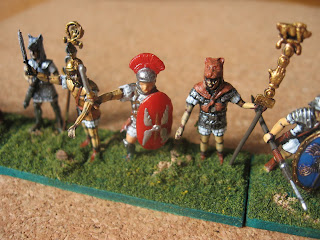 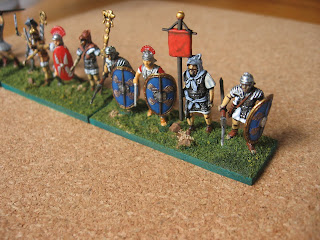 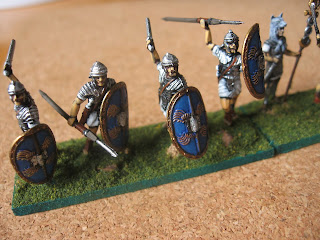 You may notice the difference in the painting style of a couple of the figures. A couple are just block painted from way back, with the rest having been painted this year. I think the later figures look much better than the former.

Personally, I like the grunts the best, which brings me to another revelation - my EIR infantry have waaaayyyy too many command figures. Like my elements for my EIR Legionary units for WMA are comprised of 1 Legate + officer (or Centurion) + 2 standards, then 1 Centurion + Vexillia + 2 grunts, and then 4 grunts. Ha! Just 6 grunts to do the donkey work for the whole unit! Thats what you get when you stick to using what you already have instead of buying more figures to correct the relative proportion of troops!

(Which is my overall wargaming philosophy - I've got next to no money for my hobby, so I make the most of what I've already got!)

Now to finish the rest of the Romans - the last six elements of Legionaries, a couple of Cav command elements and four Eastern Archer Ps.

This afternoon Robin and I got together, combined our two VSF and Skelly armies and brought them together. 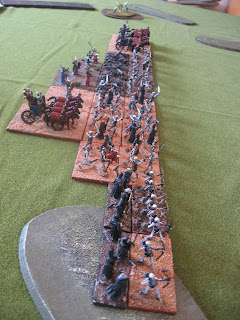 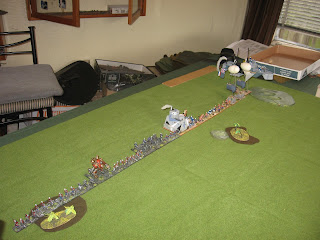 My very first PIP rolls (one for each command) were a double six, so both my God element, and my Dragon arrived. Hurrah! 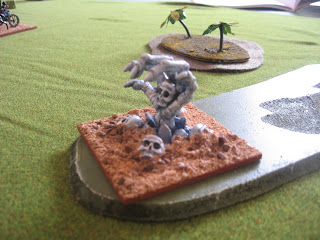 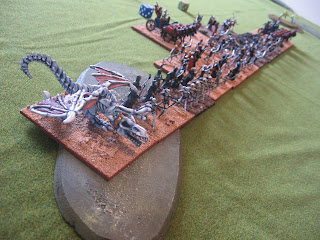 My very next bound the God buggered off! How rude to leave the party so early. Really. 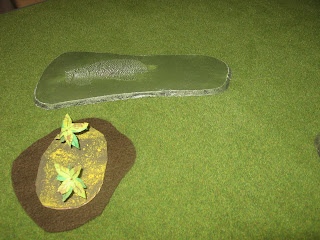 As I gawped on in disbelief and the rather large gap that had now appeared in my plans, Robin advanced the Imperial Air Service up the right flank. Not wishing to get double enveloped by the three opposing aerial elements, I charged the Dragon into the flank of the Airboat. 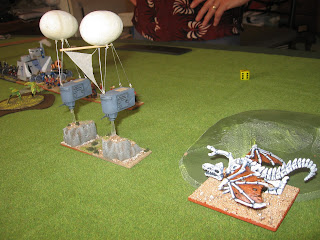 Ignoring the threat Robin sent his flyers into my right flank. 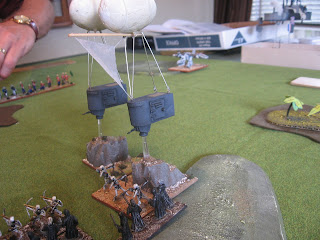 The Skelly Bows (their first outing!) bounced one of the flyers... 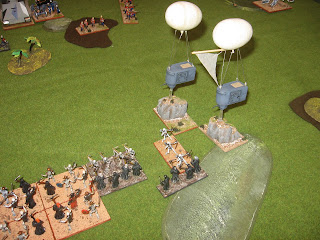 ...and the Dragon roared to the rescue! 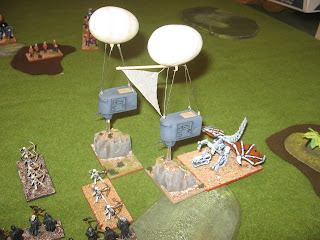 And then my camera batteries conked out. Bother it. Robin has taken a good number of photos that I hope to get hold of, but, in the mean time pop over to Robin's site and read the proceedings there. 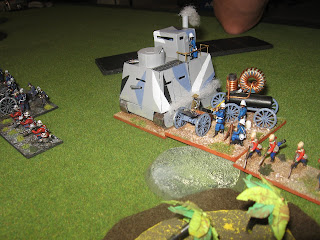 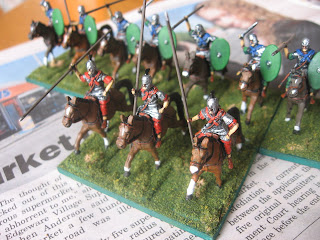 A few alae of contarii/catafractarii were formed by Trajan and Hadrian. These did not have horse armour, but were armed with the long knotos, weilded in both hands unshielded.

And so, all I did was select three Praetorian Cav figures, cut out, or off, their sword or spear, give them an identical horse pose, and add a kontos from 1/32" brass rod cut to 5cm length. 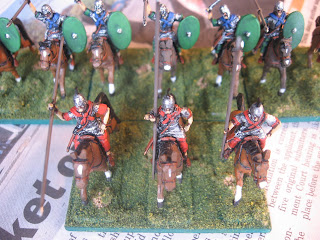 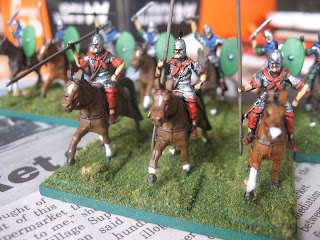 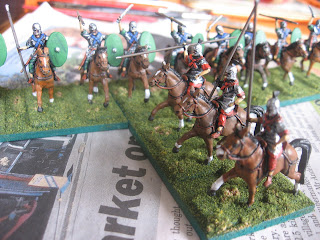 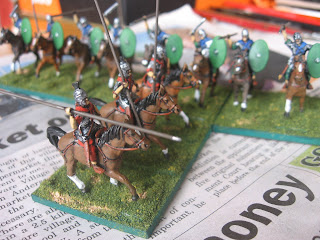 As far as DBx is concerned, I can use it in a DBA Middle Imperial Roman army (the figures for which I have put aside - whether or not I'll ever get round to using them is another matter!), or in a DBM Early Imperial Roman army (of which I am allowed a maximum of two - if I ever have another game of DBM) or, far more likely, in my HOTT EIR army.

Now to get back to painting the Praetorian legionaries.

Now that school's over, I've got some time to delve into my cute wee hobby...I'm currently working on some EIR Cv (and one Kn) elements, as well as a couple of stands of EIR Praetorian infantry - basically Esci EIR infantry with Italeri Marion Roman shields. Best evidence seems to suggest that they looked just like everyone else, but with an oval shield. 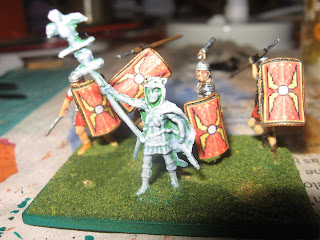 I came across an Hordes of the Things Early Imperial Roman [Dacian Wars] army list that suggested that a Hero element could be a Blade element being inspired by the heroic deeds of the past. So... 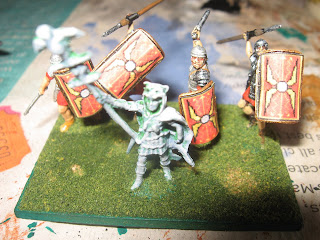 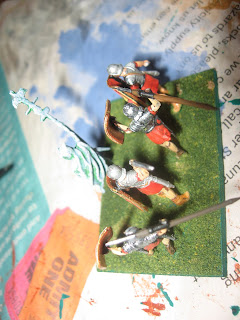 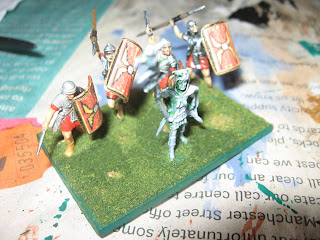 I had a spare Atlantic Roman standard bearer lying around, some spare Esci Legionaries and the memory of a standard bearer who was standing on board a Roman warship and saw his fellow Caesarian Legionaries getting freaked out by the Ancient British who were waiting for them on the beach during one of Ceasar's invasion attempts of Britain (the first one, I think). He basically jumped off the ship and said something to the effect of, 'if you don't want this eagle to be taken by the enemy follow me'. It did the trick quite nicely. Suitably inspired (or shamed), the rest of the legionaries likewise jumped ship and successfully forced a landing.

Therefore adding this all up, another HOTT EIR Hero element was born. A bunch of blades being inspired by a ghost of past glory.

I used the same technique to paint the standard bearer that I had used for my Early German ghosts.

(Here's a shot without the flash) 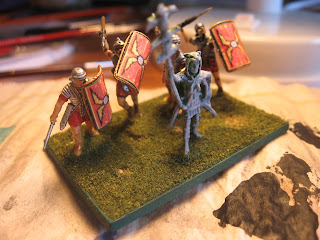