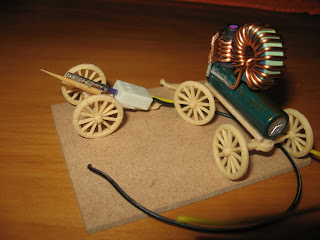 As the term is winding down I decided to take some time out of school prep yesterday afternoon to work on a steam powered electricity generator... 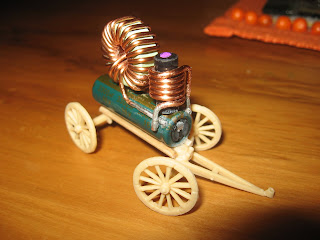 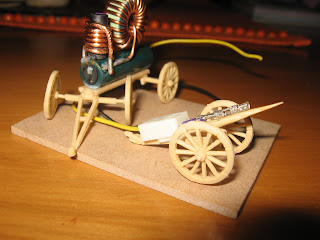 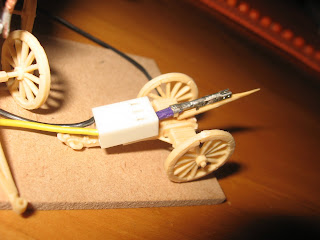 Suffice it to say, it's not done yet!

The gun itself is the carriage from the HaT Gatling Gun that I plonked in my Steam Tank, with a connector from an old PC power supply and a tooth pick (!). I know the 'barrel' is pointing pretty high, but I figured that the 'zap' is actually bounced off a passing cloud to hit targets behind the enemy's front line!

The generator is a capacitor from said power supply, along with a couple of coils all sitting atop the carriages from the Gardiner Guns with which I adorned Andy's/my Air Boat. Suitably strengthened with a couple of tooth picks.

Once I've applied a bit of paint, I'll stick them down to the base, trim those wires and connect the zapper to the generator.

I've also put aside five figures (a signaler, two officers, the Boffin himself and a faithful manservant to do all of the actual work!), but I'm not sure if they'll all fit! I may have to prize them off their painting bases to see what will and won't fit - no point in painting stuff I ain't gonna use now is there? Lord knows I game with enough plastic without paint, it would be a crime to paint something and then not use it!

I'll class it as a HOTT Magician General. (After all, HOTT magicians are essentially artillery piecies that can shoot over intervening interruptions).

You know those Boffins - they can work magic! And the Brass does like to be seen to be taking an interest in these new fangled contraptions...