Yesterday Stan revealed his latest army, Thomas the Tank Engine and his Army of Sodor!

Utterly, utterly brilliant! All from a boxed set delivered to his work (you know, bundled up with the cook books and bits and pieces that companies drop off for a week of so to see if they have any takers - actually, there's one at work at the moment).

Part of his brilliance was the cutting up of the play mat for the bases!

Here are some shots of Thomas and his gang in action.

First up, Thomas being a very helpful engine by putting paid to my own VSF Brit Steam Zappy Gun Magician General, flanked by Edward and James, Knights of the Turning Table, while Annie and Clarabelle give Clerical support in the rear. 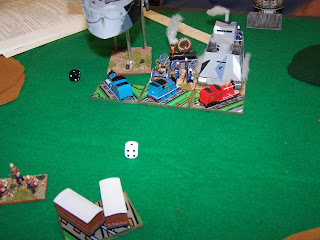 Next, Harold the Helicopter assists Mavis to take down Gordon's Dwarven Knight General. Jolly big dwarves in comparison to steam engines, but there you go! 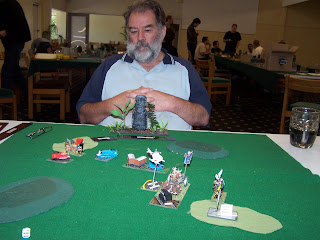 Later, The Army of Sodor takes on some 15mm Colonial Brits. Note, some Brit Tommies have just walked into (and brushed aside) an 11 minute delay [badger ate the junction box] at Norborton... 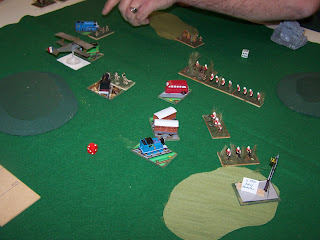 Lastly, Harold the Helicopter bravely fends off the new fangled Air Wing of Robin's own VSF Brits while Thomas and the lads (and Annie and Clarabelle) deal to the rest of Robin's army. 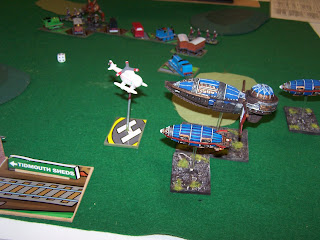