Well, I've made absolutely no more progress on crewing the Air Boat (apart from learning why it can fly - it's core is made from 'lift wood'!), what with school holidays, painting window frames (which is taking for ever!) and getting ready for the new school year, but I have managed to at least create some grates on (actually, sitting just above) the deck of the steam tank... 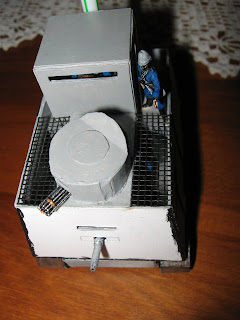 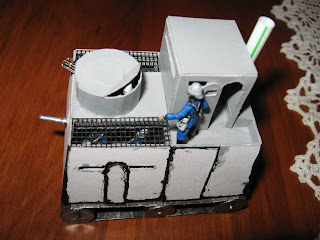 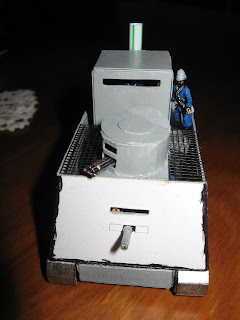 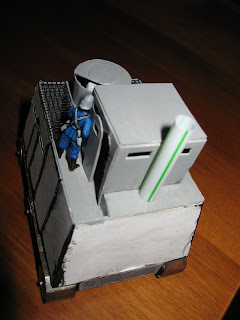 ... ostensibly to release the heat from the cabin, but really, to see the crew inside!

The grating is just some old fly screen cut to size.

One problem with retro fitting a see through portion into an already constructed model is that, well...I now realize that, yes, there is crew in there, but not much else. I should have put some ammunition stores and such in there. The crew looks like they're dancing around an empty room!

Ah well, you live and learn...

And no, the tracks aren't finished. I've got a couple of plates to fit over their sides to hide a distinct lack of running gear! Then I can glue them to the bottom of the hull.

This thing's really quite tall!

As for the funnel, I simply added it to the back of the bridge. The box thing I was planning to put on the back of the hull from which two funnels were going to protrude was just too fiddly, and I couldn't get the funnels to sit both perpendicular to the x axis and parallel to each other. So, I settled on this. Not quite as cool, but far less frustrating.

Oh, and thank you to the three people who responded to my little survey about how to class this thing in HOTT. One vote each for 'Standard Behemoth', 'Foot Behemoth' and 'Shooting Blade'. Hmmm. Might just keep it simple, and class it as a normal Behemoth. Lets face it, it would fall over in rough ground, and something this big would be easy to bring fire down upon. Apparently, there were instances in WW1 where tanks were actually knocked out by rifle fire, either through penetrating their armor (!), or freaking out their crew. Or so says Robin! :-)
Posted by Nick Grant at 21:17 8 comments: