Horah for the school holidays. As well as getting my VSF elements painted up, I managed to finish my Kiwi Crossfire Company. 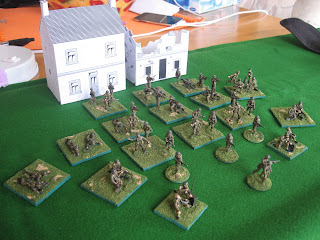 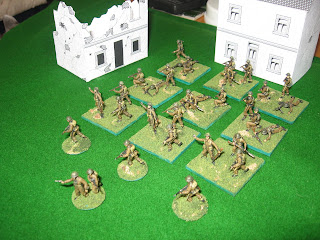 ...had been done for a while. These holidays I managed to complete their support weapons. 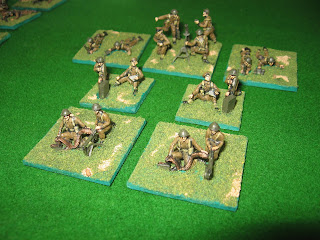 First up, we have the machine guns. 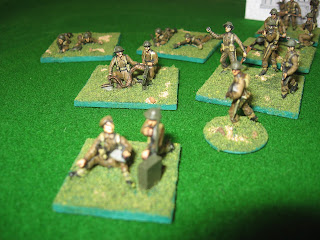 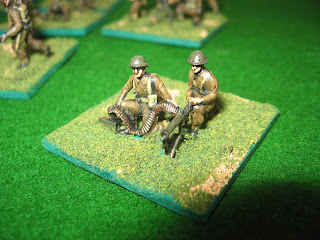 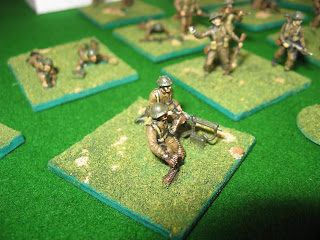 These are from the Esci WW2 British Infantry set (which I have another box of, as produced by Airfix. Go figure.) The good old Vickers gun.

Next, we have the heavy hitters. 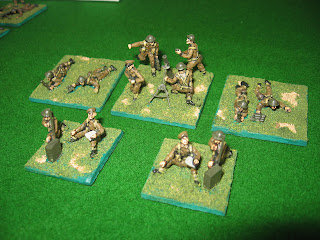 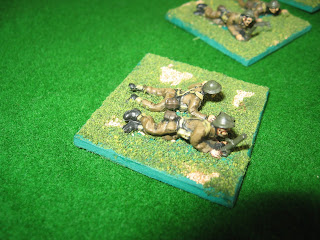 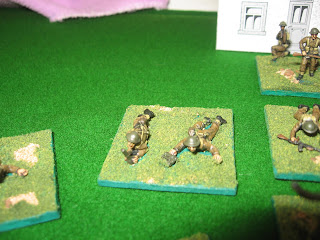 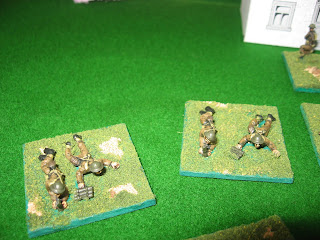 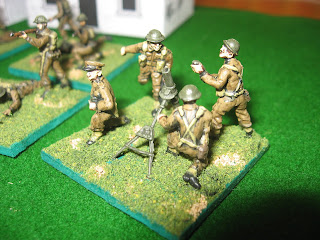 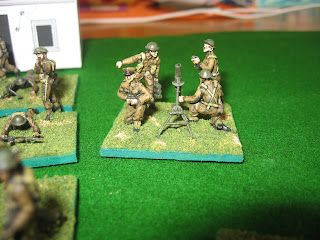 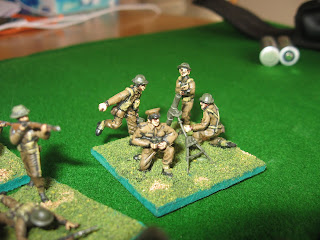 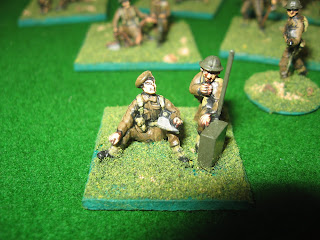 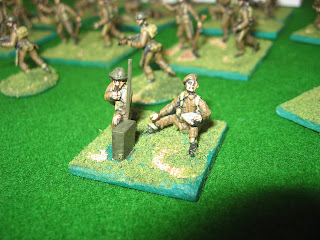 ...which are all from the HaT WW2 British Mortar set.

Quite cool wee figures these, 'specially the spotters which I've based on 30mm by 30mm squares. The rest are on 40mm by 40mm's. I know the rules state that they should be on smaller bases, but I just think they look better thusly. Not so squished with three figures, where as the smaller bases with two figures looked too sparsely populated.

Basing them thus also means I can use them for pretty much any other WW2 massed battle game as well, should the desire take me. I'm quite keen to try out Blitzkrieg Commander (Lite) and Command Decision 4 - Test of Battle, for a different WW2 flavour. Seeing as I'm an ancients gamer. All this WW2 stuff's new to me.

The paper buildings in the background are 15mm samples from Paper Terrain. These are cool. You get an damaged building with an undamaged shell that fits neatly on top. Great idea. I printed the PDF @ 150% for 20mm. Black and white, as it had to be printed on A3 on the photocopier at work, and I didn't want to chew through my colour allowance - I ran out half way through last term as it was! Should I ever get the money, I'd love to get the European Town for $US 50.00. And I quote...

Need more than just a small village for your game table? Our Town Pack # 1 includes 10 larger town buildings plus walls, fences, sheds and accessories like signs and a fountain.

Like most PaperTerrain products, the buildings all come with an intact version which lifts off to reveal a 'destroyed' version underneath. The kit can be ordered with grey roofs or red roofs.

So many toys, so little money...

Along with my VSF Steam Generated Zappy Gun, I also completed one of HaT's Colonial Gatling Guns. 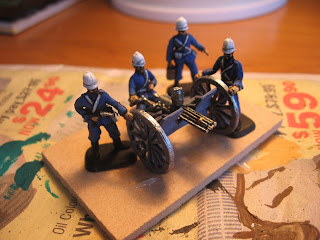 Andy is currently flocking it for me, as he did my tank and as he is doing with my Steam Zappy Gun. 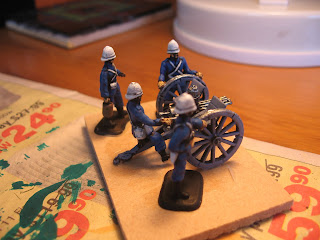 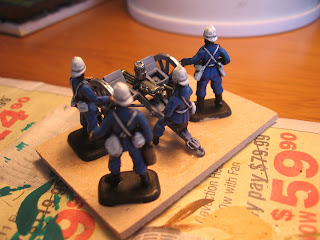 G.A.S.L.I.G.H.T. is D20 (of which I only have four), and unit-card-activation-based, which is just another (minor) thing to sort out...still, they appear a bit simpler than the Space 1899 Soldier's Companion that I'm considering as an alternative, and these reports that I have just found here do look rather cool...so...

Nick
Posted by Nick Grant at 14:33 No comments:

Thanks to Andy's stirling flocking and the judicious application of more bear stuffing my VSF British Steam Tank is now complete. 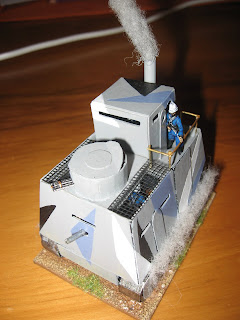 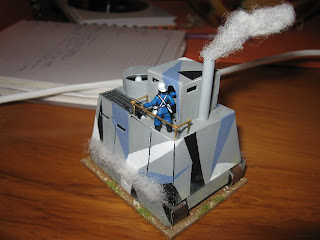 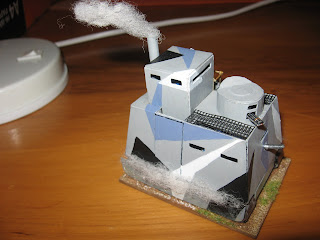 (The 'steam' was greatly inspired by this...) 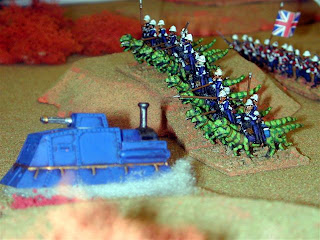 Well, after a couple of afternoons pottering around (yay, school holidays!), I've just dropped off my Steam Powered Zappy Gun for Andy to flock for me (kind chap that he is). So, just before I popped out... 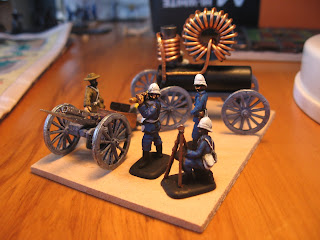 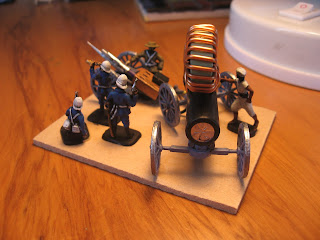 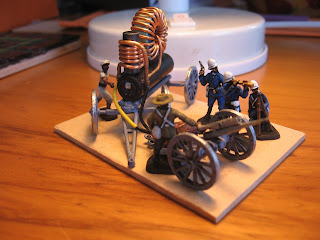 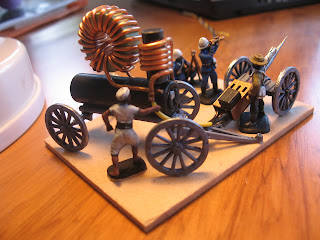 It's worked out really well. One thing I would like to change is the way I've connected the cables to the generator. Basically, I chopped them too short. Works well as is, but upon further reflection it would have looked even better had I left the wires long and had glued them coiled on the base. Ah well.

Oh, and I deliberately left the braiding on the officer black (undercoat as it happens), as per this... 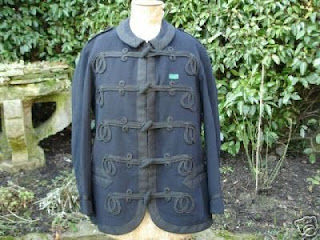 ...and this very helpful page here.

And so, I can class it as a General's element - either Magician or Artillery for HOTT - or just plain a Contraption in G.A.S.L.I.G.H.T. If I ever get round to actually playing a game now I have the rules. 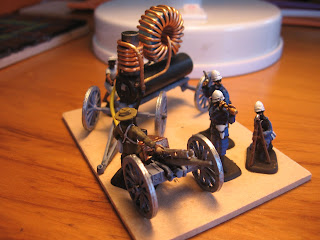