The Trials and Tribulations of Zun Onasi 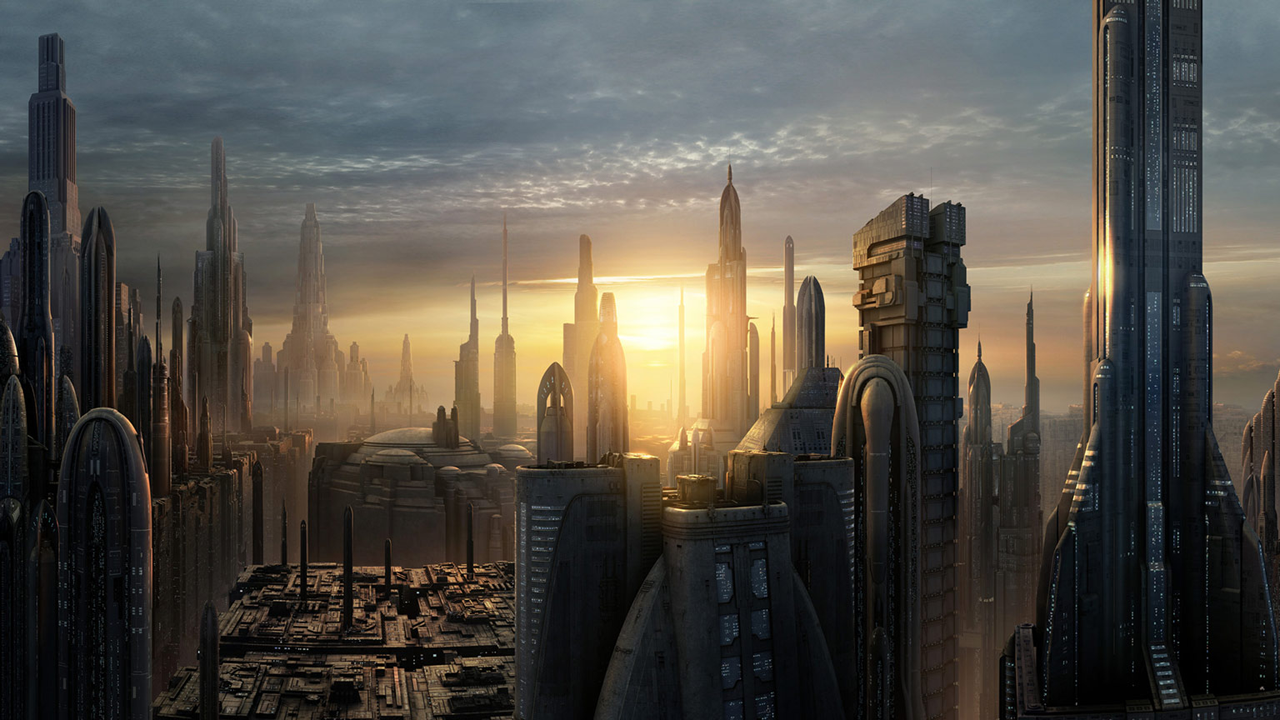 It was early morning on Coruscant, and Zun Onasi... 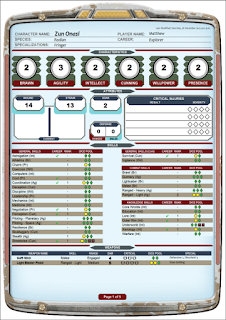 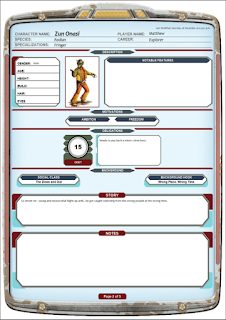 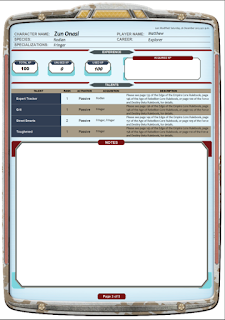 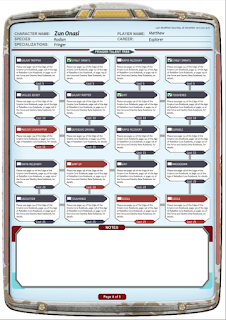 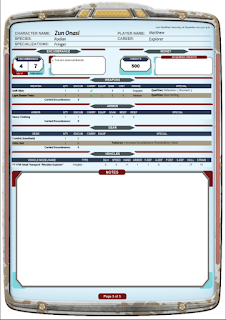 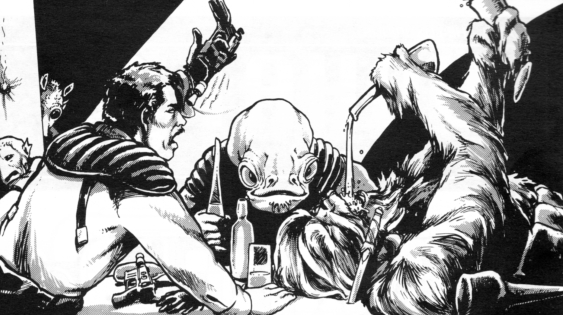 ...was stumbling home after a long night on the turps. Well, Star Wars turps.

The city, though never actually sleeping, was nonetheless less busy than usual. So much so that the street maintenance droids were out in force cleaning up the detritus of the previous day. Many have been the down and out drunkard who have been rudely awakened from their stupor by being bundled up by a cleaning droid on its duly appointed rounds. 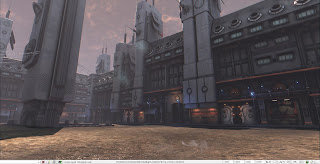 As Onasi rounded a corner in a somewhat rundown residential zone in Sector 471, he lurched unsteadily smack bang into a group of five local street thugs...literally. He actually banged into one of them, causing little more than offence. Except that these five rather took delight in taking offence. Whenever they could. So long as they outnumbered the offender 5:1. 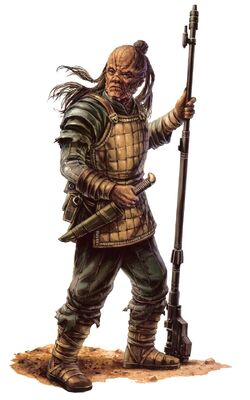 "Opps, sorry, it's been a long night," Zun mumbled.

"Quite alright, friend," the Weequay answered smoothly. "Quite alright. It'll just cost you 200 credits. For each of us."

"Hey, I don't have that kind of money brother. I'm just a simple bloke trying to make his way in the universe. Let's just forget about it, eh?"

"Ha ha ha, I see you are a bit of a comedian. I'm not a big fan of comedy," growled the Weequay.

The others slowly formed a circle around Onasi. It seemed obvious to him that this was about to get very nasty, very quickly.

[roll for initiative - Onasi has a blue...and a black for being 'under the weather' - vs. cool. Use street thugs stats. There are 5 of them all up. They win (2:1), though Zun does have an advantage that he can use.] 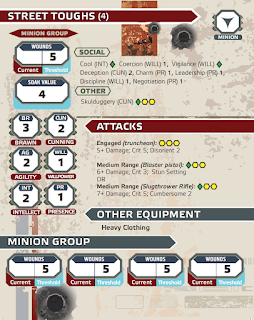 Sensing Zun's attack, one of the thugs strikes out from behind with his fist.

Zun sprawls forward, [taking two wounds], rolling quickly to his back and striking out with his gaffi stick [one hit, one threat - 4 damage - no effect].

The stick connects with the corner of the building and before he can recover it, one of the thugs kicks it away. "Poodo," Onasi muttered under his breath.

A boot lashes out from the thugs. "Oooph!" [1 more wound - down to 11] Zun jumps up and dodges the next attack, spinning around just in time to connect his fist with the face of the Weequay. [one success, three threat, causing...no wounds - three others close in, fists at the ready].

The group attacks once more, while Onasi tries to dodge, dashing for the gap between two of them [three failures - one actually connects with his peer, causing a point of damage!].

In the confusion, Zun pulls his gun, quickly targets the nearest, and pulls the trigger. [one success, three advantage]. The laser bolt slashes against an upper arm, producing a yelp [and another damage]. The group rage as one and lunge at Onasi, who desperately tries to dodge out of the way. [+ one black - one failure, one threat] He manages to step back, and, trying to steady his aim, fires once again. And...misses! [with six advantage...?]  However, the thugs take stock, and [50% chance that they carry on fighting...84...] decide that, what, with all things being considered...decide to back off.

"Hmmm, perhaps you're right," Onasi replied. "Perhaps we'll just call it there, shall we? Everyone walks away a winner?"
"Ha! Yes, we're all winners this morning!" And the thugs slowly backed off in the other direction as more and more citizens started their day. "Good luck to you."

Heaving a sigh of relief, and gently nursing his aches and pains, Zun Onasi continued to limp his way home. With an increasingly aching head.

[random event - neutral - A situation does not live up to expectations]

He climbed into his cot, and tried to get some sleep. Yet, as try as he might, sleep eluded him.

"Arghh," he yelled in frustration. He got up, and stalked over to the kitchen. "Stupid...freaking...ittu (Pronounced ee-chu) – [curse word]!" He grabbed some water and slumped down into a chair, waiting for the painkillers to work. They didn't. After a while he said, to no one in particular, "Well, blow this for a joke. I might as well go for a walk." He splashed some water on his face, got dressed and stepped outside of his apartment, and down into the day.

Even though it is still only early, the street below is bustling and full of the business of the capital of the Empire. Speeders zip by, both land and air, cafe are already undergoing brisk business, officials...officiate, going thther and yon on their bureaucratic errands, looking conspicuously human. Many loyal citizens look askance as they pass Zun.

The fresh air cleared his head a little, Onasi decides to head over and grab a morning beverage.  He sat down at a sidewalk establishment. 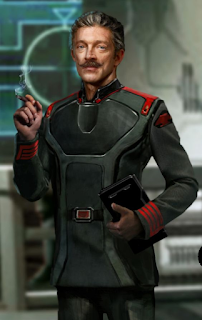 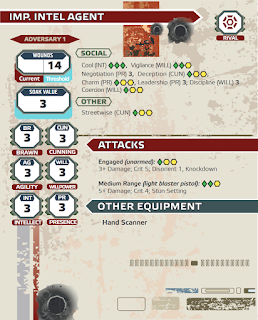 As Zun is clearing his head with some morning [space coffee], he is approached by a member of the  Imperial Security Bureau.

"Rylun pa getpa gushu? – Enjoy your breakfast?" asked a voice behind him. "I wonder if you could help us. You ran into a person of some interest to us last night, and we would like you to reestablish your acquaintance with him."
"Sorry, what?" 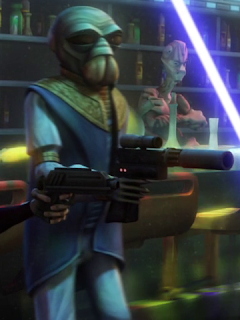 “One the the gentlemen that you encountered this morning, specifically the Aqualish, bit of a silent one, we believe he is working for a small time smuggler who is getting contraband off world. We would the for you to infiltrate his organization and provide us with the specifies of his operation."

[You roll and agree]

"What’s in it for me? Apart from the appreciation of the Emperor?"

"Do not be so quick to dismiss your obligation to law and order,” he replies. "You will be sufficiently recompensed for your efforts."

He hands you a data pad with some basic information.

"Here are your contact details, and what information we have gathered. I suggest that your first port of call be the tavern known to be frequented by our friend here. You will also find details of the correct procedure to pass or any information gathered. Rest assured, Mr Onassis we will be in touch again very soon." And just like, that, he gets up and leaves.

“Well, I wasn’t expecting that…" you say to yourself.

Finishing your drink, you pay your tab and leaves.

[Chance all a random encounter on the way. Remote event - 49 Cessation of benefits.]

On the way you overheard a newscast. "Once again, the might of Imperial Justice has closed down another local crime syndicate in sector 94."

"Blast," you say to yourself. "That means your on your own. No help from Borsa and the boys now.

You enter the dimly lit establishment. Struggling to adjust from the glare of the outside, your eyes take a moment. Before you lie the fairly typical detritus of a worn out world. Off duty bureaucrats sooth their sorrows with the alcohol of their choice; Off worlds bidding time before leaving the system; and here and there (most especially, there) members Coruscant’s less savoury citizens were waiting, watching, and generally scheming their next move.

[Do you recognise that he's not here? Perception + setback - it's dim in here after all - one success, two failure, one triumph, one advantage, two threat = no result (Triumph? Nope it, counts as one success and an uber advantage.]

You glance around the patrons in the bar. You can’t see your mark, but that doesn't necessarily
mean he's not here. Perhaps he is outback. You decide to approach the bartender. A few look up at you, as you approach, but most soon lose interest and retreat back to their own business. squeezing past a couple of Twi’leks you reach the bar. Ordering a [ space beer] you strike up a  conversation with the bartender.

“Alquono deg apprefaron. Thanks for the drink," you say to the bartender. "Tell me, what is your name, friend?"

"D'rebis Gin, at your service. You're new around here. What brings you to this humble establishment?"

“I was looking for a friend of mine. An Aqualish by the name of Utonk Hid. It's been a while since we caught up. He said was that he was living around here. Don’t 'spose you've seen him? Blonde hair, brown eyes. Works for whoever's paying well, if you understand my meaning?"

[A roll on charm to persuade D'rebis to pass on the knowledge. Av difficulty roll + 1Bl, cause he’s so friendly. 1 Yellow, 1 Green – 2 successes, one threat – he gets a little suspicions - take away  Bl for friendliness] 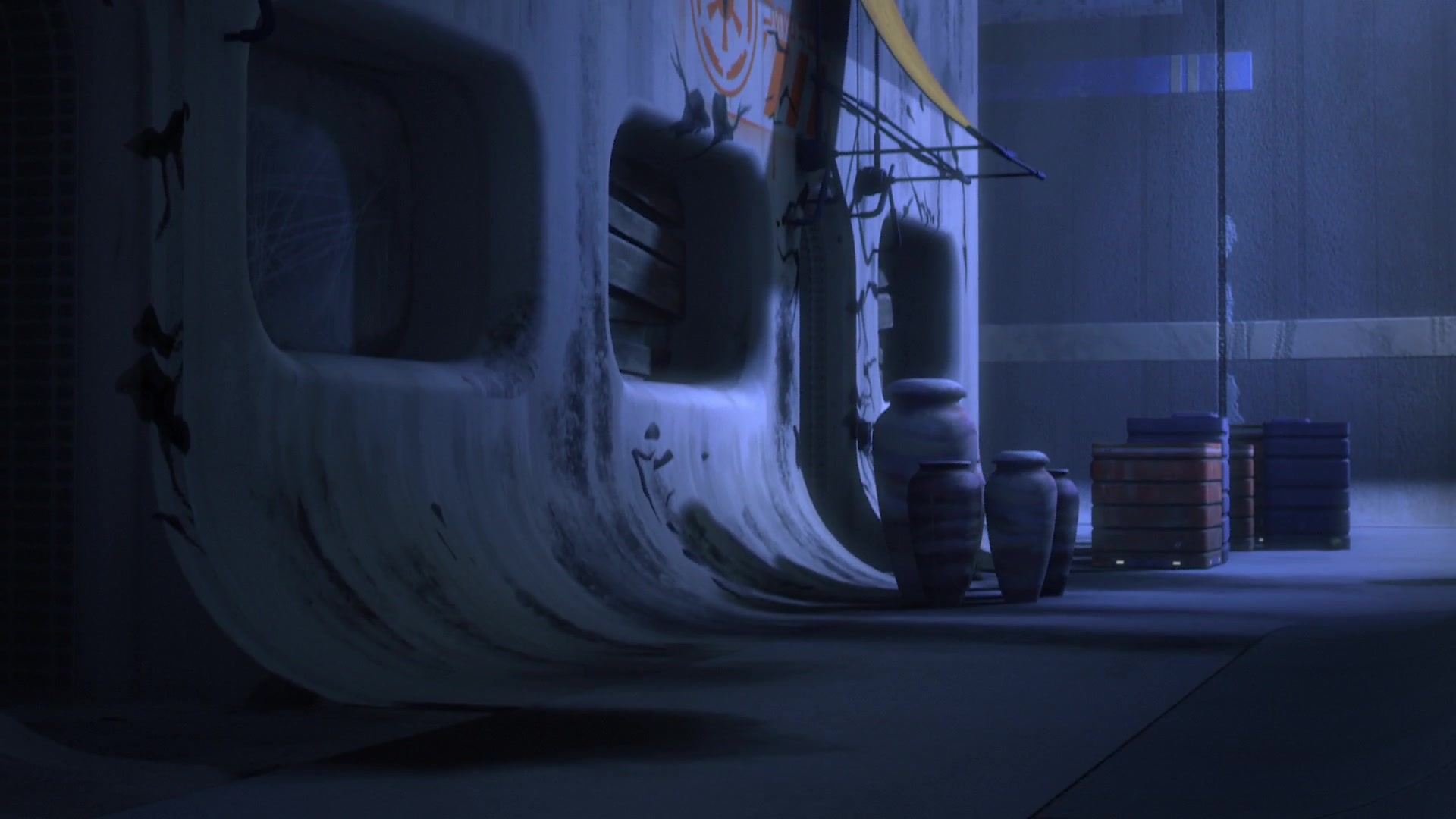 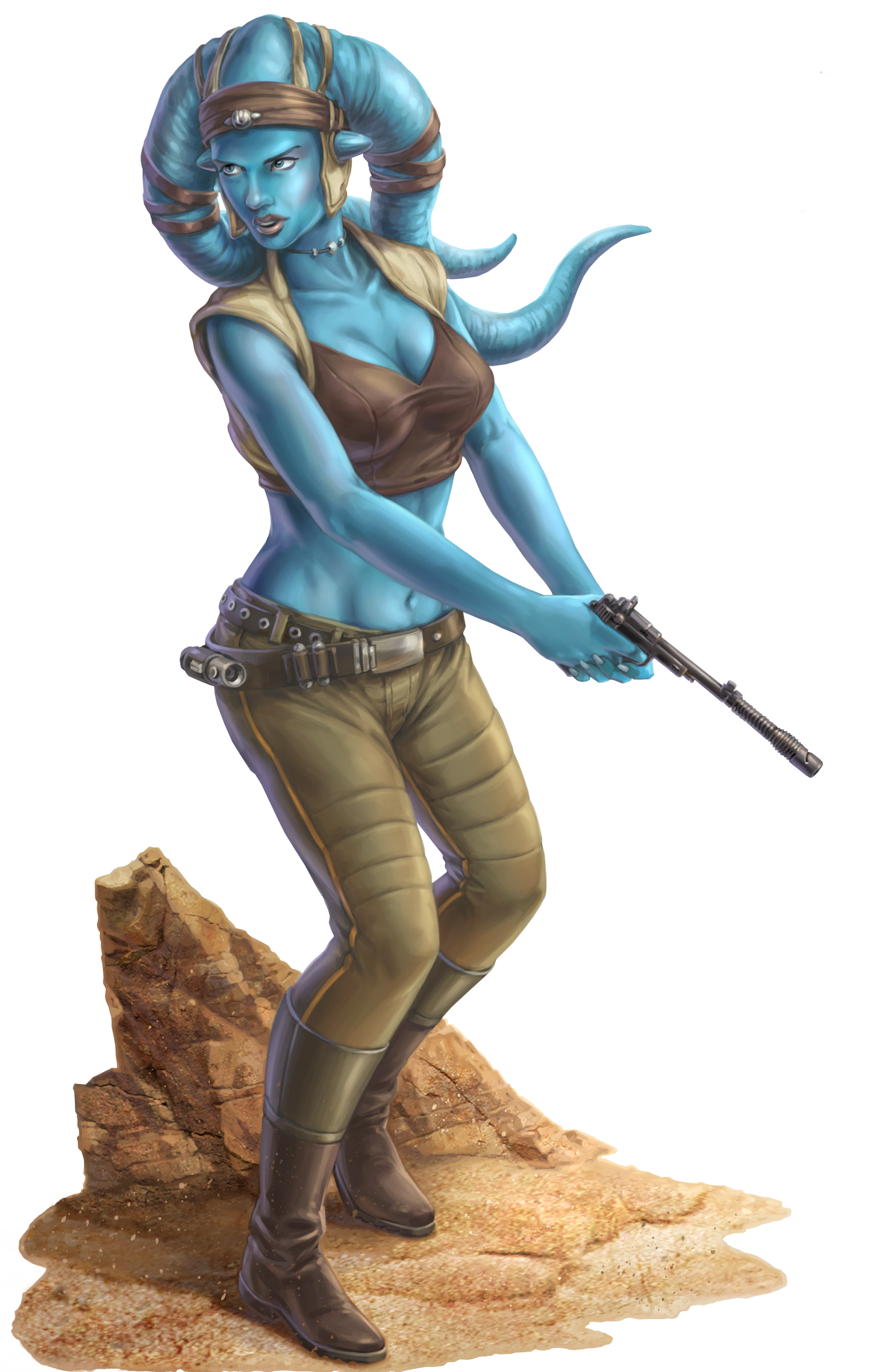