With our school production out of the way (it went better than I could have hoped!), I should be writing report comments. They're due by the end of the week, and, well...ughhh...

Anyway, my lad Matthew invited round his mate Andrew on Friday night, and, as I hadn't played with my new A Wing before, we set up a game. About 83 points worth, as the fourth TIE fighter's peg snapped as I was getting it ready, so it had to sit out the game while some glue dried.

This was also my first game with some 3D asteroids that I got from a bloke in Dunedin via Trade Me. A little big regulation wise, but way cool!

Andrew took the Imperials, I took the Rebels, and Matthew took a seat to enjoy the view.

Around zipped the A Wing... 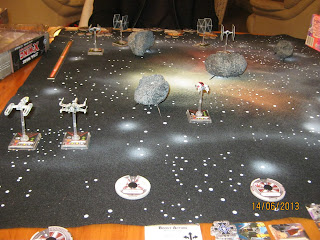 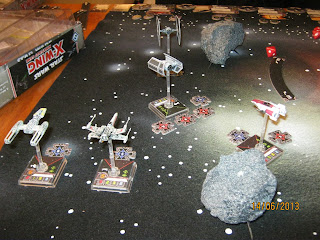 ...and bammo! Torn to bits it was thanks to the TIE-A's cluster missiles! 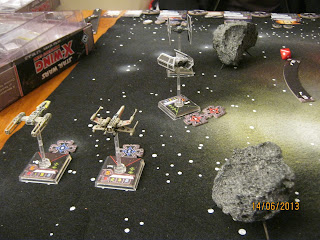 (I've since read that the A Wing is best to zip thither and yon rather than head straight in.)

And so the Y Wing continues it's lazy arc, escorted by the X Wing (who probably feeling like a sitting duck next to this, well, waddling duck...) 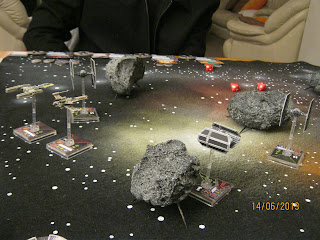 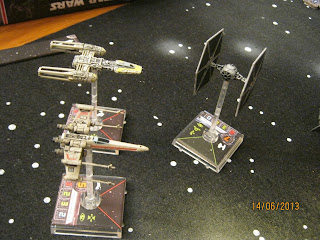 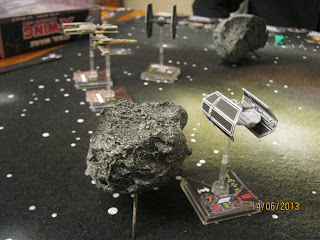 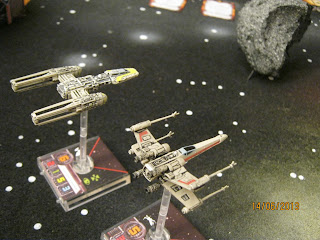 Success! My Y Wing's first ever kill. The X Wing ended up with nothing to shoot at. 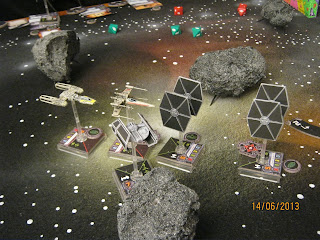 ...turned out that it didn't get much of a chance to do anything but die! 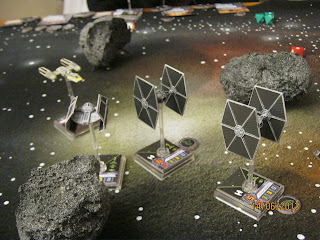 And that's where we left it. There was just no way the Y Wing could survive against the three remaining Imperials.

However, upon further investigation, that A Wing would more that likely have survived that first encounter. We were adding the "+1 attack die when attacking at range 1" modifier to the missile attack which you don't do to missile attacks, just primary weapon attacks. So Andrew would have only thrown 6 dice, not the 8 that he did (cluster missiles essentially attack twice. Urghh.)

Sooo...I call that an inconclusive result! Who knows what the A Wing might have added to the Rebel's cause!

Anyway, we set up for another game. Same sides, same forces. 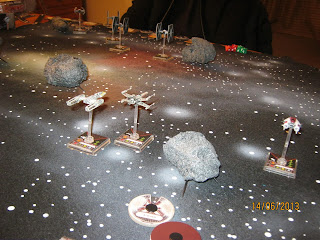 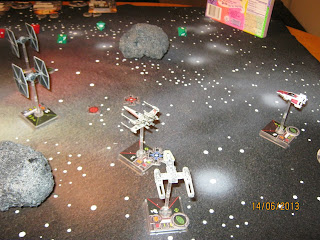 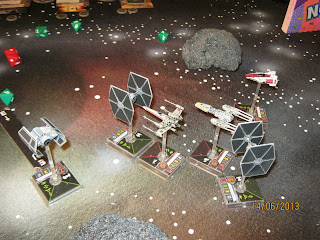 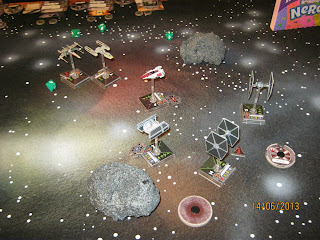 (Note the candy the boys were eating. Most appropriate, I thought, given the setting!)

Things were going much better for the Rebels this time (I was surprised that the A Wing survived that cut across the middle there), but Andrew had to shoot through as he had work in the morning.

Still, it's a great wee game.

And I just picked up a TIE-I yesterday to add to the mix...