As stated earlier, I've been pottering around with bits and pieces while finishing stuff, and one thing I've been meaning to do for ages is replace some of my psuedo Pre Islamic Arab camel riders for Araby dudes who were less armored. 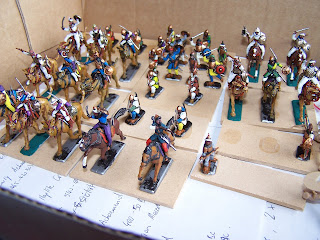 Yes, I've got some Normans that I'm planning to morph into Early Crusaders (at some point), but, as most of my armies are from DBA Book II (Classical Ancients), I wanted an ancient Arab army - with camels! So, that's what I built. II/23a Later Pre Islamic Nomadic Arabs.

The trouble is, most of these Saracens are appropriately dressed as, well, Saracens. They're really wearing too much metal to be Pre Islamic. So, to try to minimize this problem, I got hold of some Esci Arab Warriors (from their set to fight the Colonial British in the North West Frontier), selected some poses, chopped them in half and glued them to some legs that were all ready to sit astride a camel thusly... 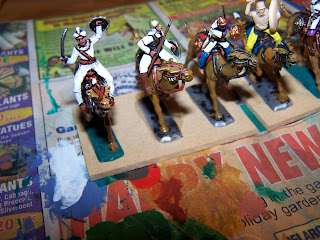 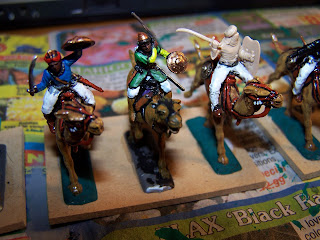 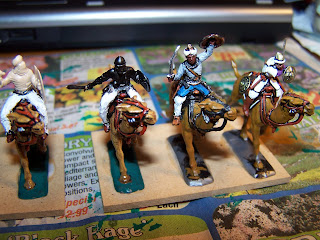 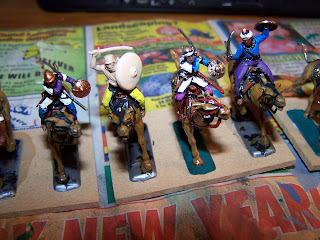 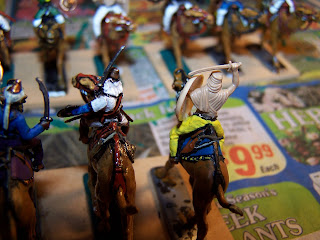 The more observant of you will notice that that last converted figure doesn't actually have a left arm! Hence, the big shield (probably too big at that). It's integral to my approach to wargaming with plastic figures - don't waste anything!

And I know that they still look too well attired to accurately represent Pre Islamics, and that Caesar have now produced Bedouins, but...I've already got these guys, and, well, I'm cheap!