Well, I've pasted the Gardiner Guns and crew atop Andy's Air Boat, and they look the biz. 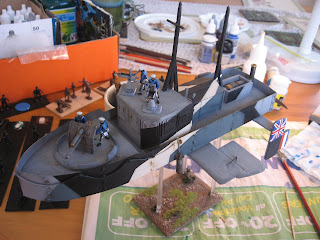 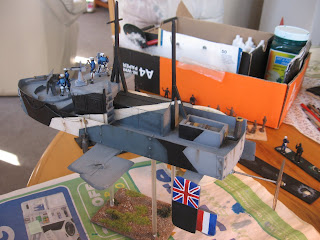 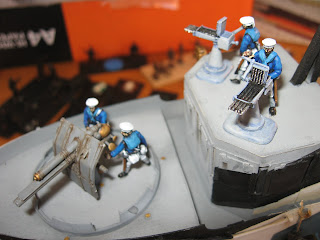 It's a bit hard to see from this last photo (the camera's macro setting focused on the nearest Gardiner gun, rather than the whole 'vignette'), but the loader is one of the navy Gardiner crewmen with his arms replaced with the ones from the HaT Colonial Artillery loader, as inspired by S. M. Manix's contribution to HaT's Everything Toy Soldier page.

I also replaced an arm on the other main gun crewman, though the effect isn't a lot different to what he had originally.

Eventually I may put a solid railing/fence around the Gardiner guns, and I'll paste the officer with the telescope (once I've figured out how to do the braids on his jacket) on top by the ladder. Or on the bow. But I think closer to the bridge would make more sense, from a command perspective. In the meantime I'm happy enough to put it away.

Sweet, another thing down, now to work on my Late War Kiwis...oh, and that VSF steam driven magician artillery thingie I've got in mind, since I've got those spare gun carriages from the Gardiner and Gatling guns. A bit like this...

...with one carriage for the steam driven electricity generator and one for the electricity driven shooty thing, courtesy of a mad boffin type - hence the magician classification.