...and a shooter element.

Just before I bury myself in writing general report comments (sigh), I have managed to complete (sans base - I need to grab another couple of 25mm DBx chariot element bases) another $2 Shop Dragon. This time for my Skellies... 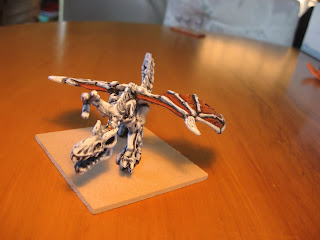 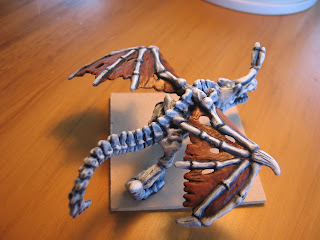 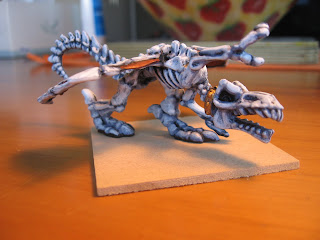 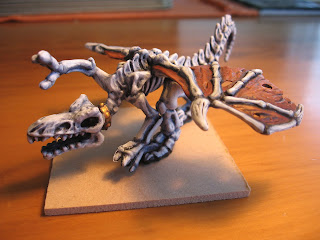 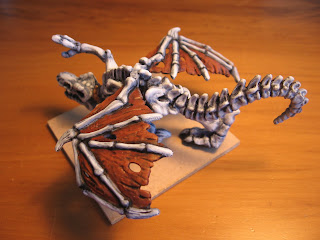 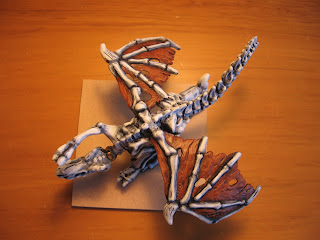 The subtle layering of greys were a little redundant, they can't really be seen, but, well, nothing ventured, nothing gained!

Here he is beside an element of Skellie shooters, for a scale comparison. Not really that big, but he has seen better days! 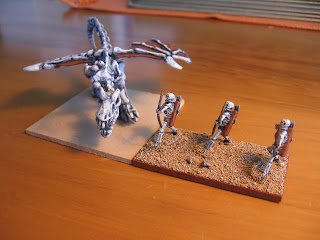 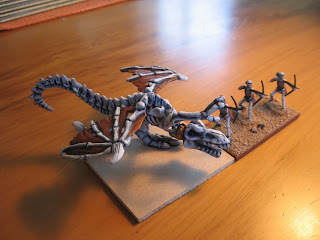 These Skellie archers are from the Caesar Undead army box. They're really cool!

I've got a crazy idea to expand my two HOTT armies worth of Skellies to make a WarMaster/WarMaster Ancients army to fight my Romans. I'd need a lot more Hordes though...lets see...2 boxes got me 8 elements of Horde at 5 figures each + 5 figures to crew the three chariots + 4 archers for the 2 LH elements + 6 scythe dudes I've for those Bd elements + these three archer figs...hmmm...say 58/2 per box = thats another 4 elements of Hordes (= 12 bases = 4 WM units) + possibly another unit of blades, and I should have enough archers for two more elements (+ this one = 1 WM unit), already got 3 chariots (1 WM unit), I should be able to scrounge two archers from somewhere for another LH element (thus equaling 1 WM unit), + this dragon and a munted one I've still got that I've been planning to make into a Behemoth/Bone Giant...I wonder if I could class these HOTT Magicians as psuedo artillery...hmmm...how many points might that be? Got to get to 1000 to match the historical WMA armies...

That is quite a dense block of text...

Done some quick calculations, and it looks like I can muster just over 1000 points if I count the Dragon as a Sphinx, or over 1100 if I count it as a Dragon using the stats from The Battle of Five Armies. I'd just need me one more box of figures.

(There has got to be an easier way to embed a table than by coding it by hand!)

1. Stats taken from The Battle of the Five Armies - for Goblin Guard units! I needed some way to incorporate my HOTT Bd elements!

3. Sphinx. Because the Sphinx has so many hits (6) we must consider the possibility of hurting the Sphinx and reducing its effectiveness in subsequent turns. Therefore, if a Sphinx has accumulated 3-5 hits by the end of the Shooting phase or Combat phase it is deemed to have been badly hurt. Once a Sphinx is badly hurt all accumulated hits are discounted and its maximum Hits and Attacks are halved for the rest of the battle (to 3 Hits and 2 attacks).

6. Tomb King. The Tomb King is empowered by the spells cast upon him when buried. He can use this power to increase the Combat Attacks value of all the stands in one unit within 20cm by +1 for the duration of one Combat phase. This ability can only be used once per battle.

...gets me about 1010 points worth. 1210 if I count this bonie dragon as a...well...dragon. Enough to go up against my EIR, Parthian, Indian, Persian, Alexandrian, heck even my Gobbo WMA armies!

Right, I really must get to work.