So here we were. Two down, one 'up'[ish], last game of the day, second bottom table...I was hoping to at least balance the win:loss ratio out a bit.

Meet Jarred. Jolly nice chap, he too was only here for the day, so...what happened on our table mattered not a jot to the overall standings!! 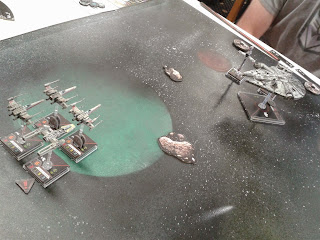 "Whatdyamean I gotta shoot at Biggs?" 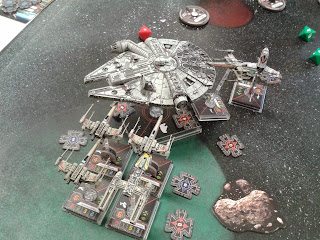 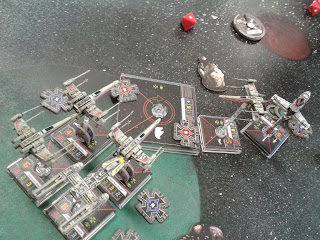 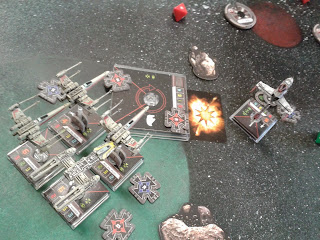 We all fly past each other... 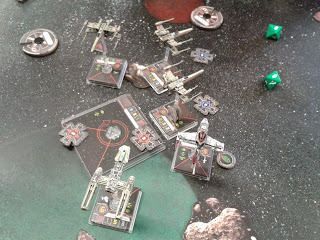 ...well, I try to. Garven and Red 2 land on an asteroid, and Dutch couldn't even clear the YT in his attempt at a K turn. Still gets a stress for his efforts though.

To add insult to, well, embarrassment, as well as scouring some more paint off Garven with his anti-pursuit lasers, Jarred fires his YT's turret and a load of Advanced Protons as his B Wing flies past to land an ongoing critical hit on Dutch. 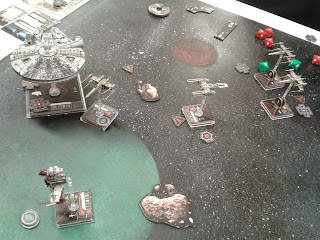 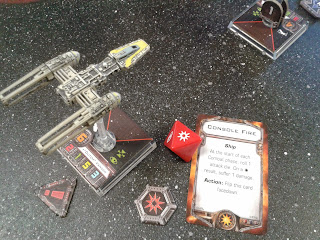 I don't think I've ever been so pleased to roll a critical hit!

Even though Garven was getting splattered with the smuggler's APLs... 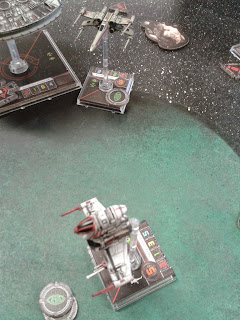 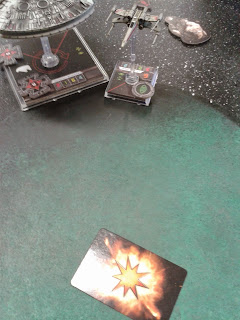 ...it didn't really put him off his game.

That must have been one big bang - a B Wing still carrying a load of ordinance. And a Recon Spec.

And so it came down to four on one. 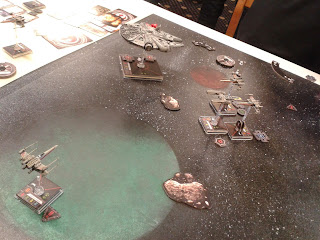 Well, really 3:1, seeing Garven was out of range this turn. 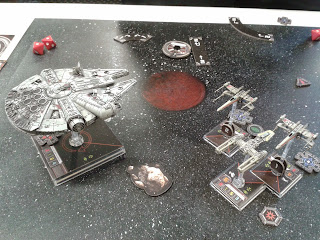 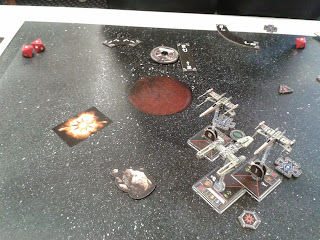 It's surprising what some concentrated firepower from a trio of old clapped out early generation fighters can achieve!

Thanks for the game Jarred. I really enjoyed it!

So that was the end of that. Four games, two absolute drubbings, one win-by-the-skin-of-my-teeth, and one win outright. But the most important thing?

A good time was had by all!

Thanks Tim for organising it, and thanks guys for playing. Suffice it to say, it was a lot of fun!

(Ha, 14 out of my last 15 posts have been about X Wing! Just received the latest version of DBA 3.0 (hard backed and all), so after some Crossfire action, I'll be returning to where this all began. Ancient wargaming with 20mm plastic figures.)
Posted by Nick Grant at 20:58