A significant part of my WMA Later Raetian Goblin army is my Storm Giant. 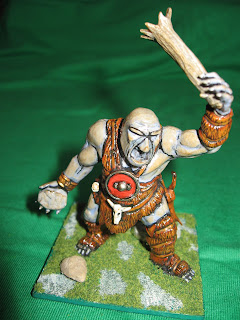 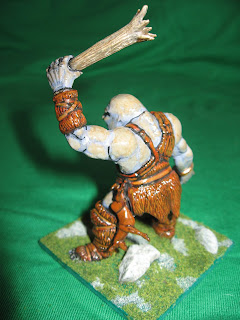 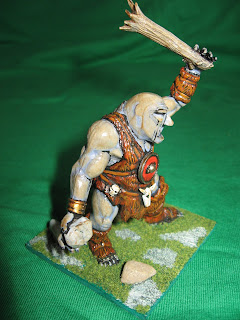 Huge and dumb, when he's going in the right direction he can be quite effective...


This is a slideshow of the second WMA battle of my Later Raetian Goblins, featuring this said Storm Giant, vs. my Early Imperial Romans. (Warning, the whole thing lasts just under 10 minutes!)

I adapted the following stats from The Battle of the Five Armies, a Tolkien derivative of the original Warmaster...


...with the notes lifted straight from BOTFA...

GIANT GOES WILD
Roll a D6 to determine what the Giant does.
D6 Result


In terms of HOTT, it is classed as a God, though I have yet to actually use it in a game. I did briefly consider using it as a Behemoth, but it's just too big, way bigger than the Troll...

As for the model itself, well its simply a Zvezda 28mm Troll without the teeth or pointy ears. I painted it grey (in layers), and then over coated it with Cabots stain and that's kind of where it went a little wrong. The Cabots was too thick, and instead of flowing into the crevasses of the mini, it acted as a thick drybrush and sat on top! Still, I quite like the finish - it still highlights the shading etc, just in reverse!