Well, its time for another HOTT Winter's Day in July (it will be on Sunday at any rate), so I thought I'd dust off my Raetian Goblins... 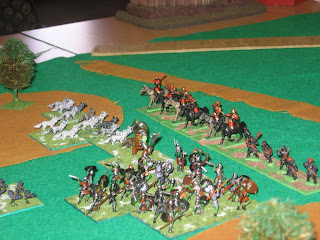 And for those with particularly good eyesight, yes, those are 20mm plastic Esci Romans painted green!

I got the idea from a 1991 copy of Practical Wargamer (for the time being, a scan is on my old site here - the download of which apparently doesn't work, bother it!), and I quote...

An example of the suitability of these figures can be given by consideration of the troops of Tolkien's Middle Earth.

The Rohirrim are often depicted as "Vikings on horse back", although many fought on foot. Revell’s Saxons are ideal for the Rohirrim. The Dunlanders are described as wild hill and herd-folk. The Celts, barbarians and Britons would represent these well and together provide a wide range of sword, spear and javelin types as well as archers and slingers. The Esci standard bearer would make a good shaman. The Revell Norman’s provide a number of high elves, other figures could be wood elves or foot troops of Gondor or Mordor. The English and French knights are perfect for Gondorian types, as are the figures provided with the Airfix Sherwood castle. The three Revell sets also contain a number of open handed figures (as do some Esci boxes), this allows for an even greater variety of troops).

Further Mordor foot can be found in the Muslim warriors (Near Harad) and Zulu’s (Far Harad). The Zulu’s could also be used as Woses. No Middle Earth battle would be complete without orcs and goblins, or should I say Roman legionaries, which paint up well into these roles.

And so, my Goblins were born!

Over the years I slowly gathered bits and pieces to fill out the likes of the wolves (15mm metals that I initially got for my Riders, but they were too small. I got a couple of 28mm Lizards. The Goblins seemed to fit...), the Troll (a metal figure than my sister got for me when she visited Hungary, of all places!), bats (again, 15mm metals - I'm leaving them off the table for this upcoming tourny. I'm likely to need all the PIPs I can get to replace the Hordes!).

I've even got a Zvezda 28mm Troll who I'm using as a God (Storm Giant).

Ok, so I had the figures...but why did they look so Early Imperial Roman? (Umm, 'cause they are. Duh!) I applied some thought to a justification...