Back to the X Wing competition.

Anyway, he also was sporting a TIE Fighter swam. More characters, including Darth Vader, I think.

This was the first of the scenarios.

In the midst of an asteroid field, a crew of a freighter, or shuttle, or something... 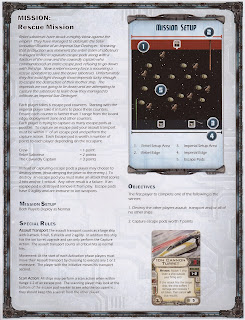 Oh, that's right. Bunch of Rebels blowed up an Imperial Star Destroyer from the inside, bailed out, have to be rescued. 2 points ea. Capt'n and a few crew also bailed, 3 and 1 point respectively. All via an Assault Transport.

Just one point to note, the transport has to be with in range one to pick up survivors (cool mechanic - who's in the pod is face down, on the other side of the escape pod cards), and can't do so if touching an asteroid. Or another ship. 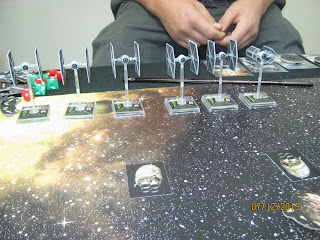 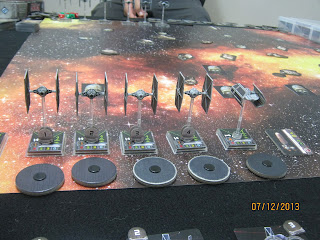 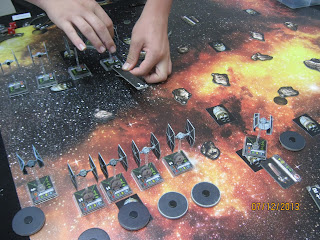 And here's where I went wrong. (Actually, I guess we both did. We moved the transports last, instead of everything in appropriate pilot skill order (the transports had pilot skill zero, so should have gone first)). I was careless with my transport, and, well, either left it in the way of other ships, or flew it over asteroids. Either way meant it couldn't do it's action - picking up pods. Bother. 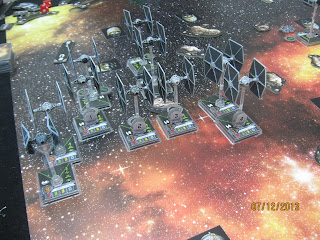 Mine are the TIEs with #s. And the TIE I.

The TIE As target each other. My Storm Squadron pilot vs. the Dark Lord of the Sith hisself. 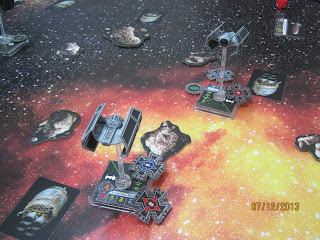 I focus all my fire power on Night Beast (Pilot Skill 5). 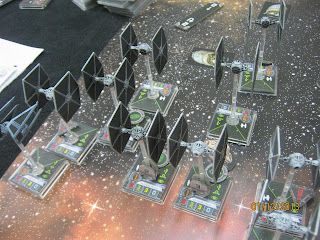 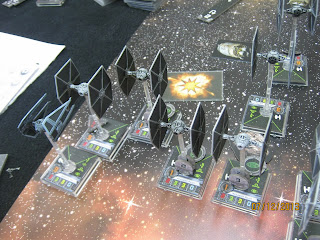 And it worked! First blood to me.

However, Justin had carefully read the scenario objectives and was quietly picking up survivors...including the Captain.

We zoom past each other, I Koiogran [Immelman] turn and... 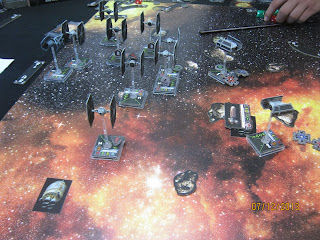 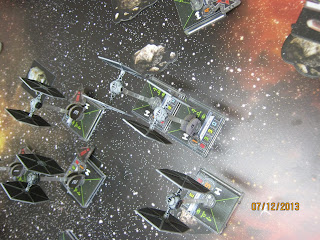 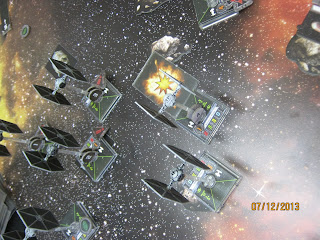 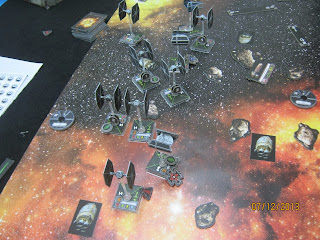 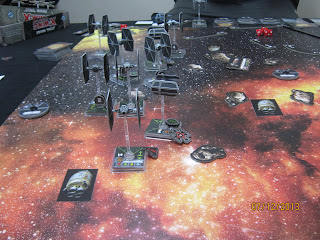 However, while I was destroying his ships, Justin was playing the scenario. He picked up 7 points worth of survivors, and just like that - game over!

Very clever stuff Justin. Well done! He went on to win the comp.

Still, two zip, that still nothing to be sneezed at!