Happy Birthday to Me...

Just picked up some goodies of late to celebrate my birthday. 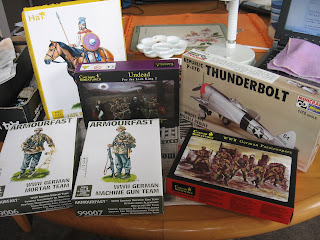 First up, a P-47 Thunderbolt to aid my Kiwis in Italy. 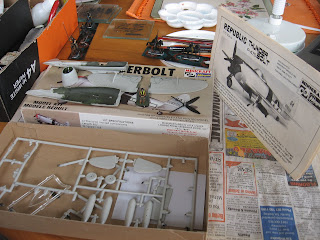 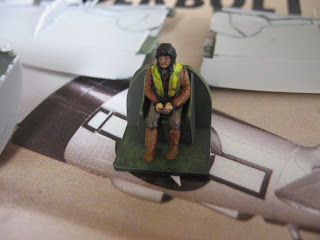 A very simple model that I've made more difficult for myself by cutting out the one piece wheel well doors into three parts, and then gluing them back together so's one can see the three parts of the closed doors. I temporarily lost the point that this is a wargame model, not one for display.

This is the first aircraft model I have made in a long, long, long while.

Next up, a box of Caesar Fallschirmjager all split up as a Crossfire company (three Platoons with Platoon leaders, a Company Commander (and lackie) plus some grunts to act as Forward Observers) to compliment my Kiwis. They need someone to fight after all. First in Crete, and then again in Italy.

I heard somewhere that they had a grudge against the New Zealanders during the Italian campaign. Possibly something about the fact that the Kiwis shot them while they were still hanging helpless in their parachutes while they were on their way down to Crete. War's an ugly, ugly business. 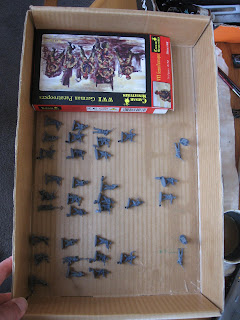 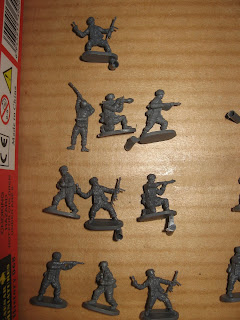 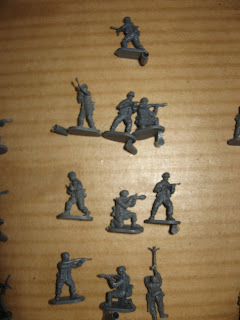 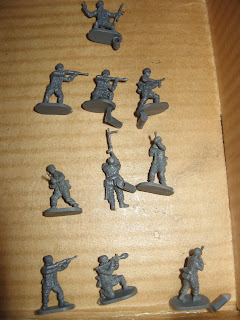 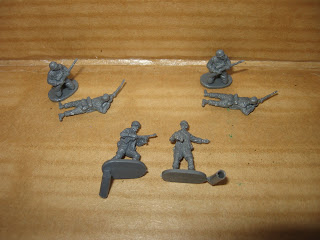 I found a very good guide on how to paint them here.

The support weapons are for them, funnily enough. 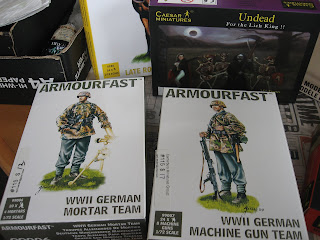 Next, my last box of Skellies so that I can finally finish my Skellie Warmaster project. This'll give me my final four elements of Horde (making a total of 12 - four WM units), another two elements of Shooters (making one WM unit), and one element of LH (finishing one WM unit of Skellie horse).

Finally, we have the HaT Late Imperial Roman Light Horse box, which I'll split between four LIR LH elements (two for the West (Javelins), two for the East (Bows)), two Sub Roman British Cavalry elements, and five horses to be used in amongst the HaT Late Imperial Roman Medium Cavalry, if and when they come out. Some barding on these Medium Cav is fine. All barding, not quite what I'm after. So this box of LH gives me more than enough options to mix and match as I see fit. 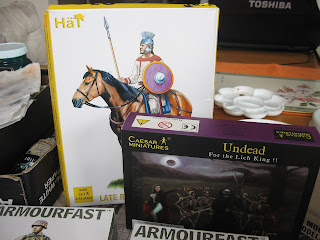 Now all I need is a couple of Panzer IV Ausf G or Hs (did you know that Armourfast don't make any?! Most prolific German tank of the war it was...) and perhaps a Stuka or ME 110...

So many projects, so little time!