Just finished coaching a couple of newbies through a couple of 50 point X Wing games (4 Ties vs, 1st, Luke and a Rookie (the Rebels got completely done) and then Han in the Falcon (with Marksmanship - Han won with hull to spare), however, before I post a couple of X Wing games with Bruce, here are some Grunzen that I finished earlier today...

I was going through the Crossfire organisations and realised that I hadn't any German Battalion Commanders, neither did I have any German SMG squads. So, I pulled together what figures I had spare (I've still got a bunch of Pegasus SS - I'm pretty sure four of these are them - which I was thinking of making, well, a SS company out of, and the Fallshirmjagers...should I ever get round to finishing them...) and, since I was at it anyway, pulled together another platoon worth, including a Light Machine Gun squad. 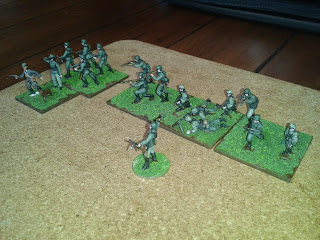 The new platoon. My splinter camo isn't nearly as good as Alans! 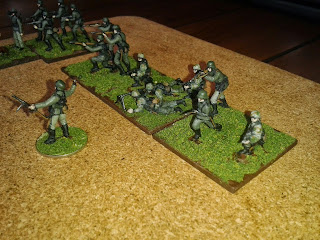 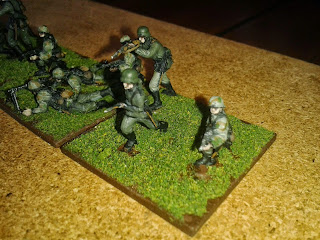 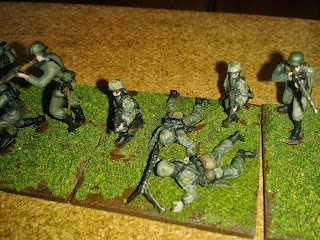 I've been following (or trying to follow) an interesting conversation in the Crossfire Yahoo group about how best to model (in game terms) the effect of the MG 34/42 LMGs that they interspersed throughout their rifle squads.

But this just came about 'cause I had them spare! 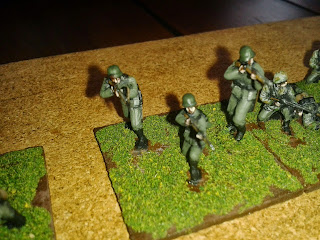 And here's my Battalion Commander. Identified by the dog! 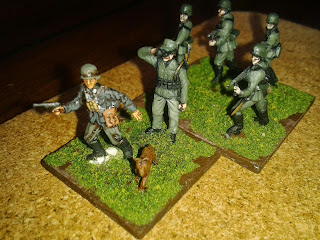 And my German SMG squad. 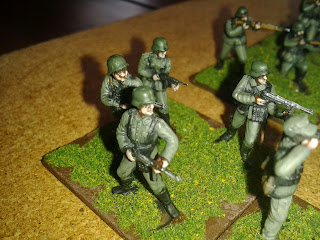 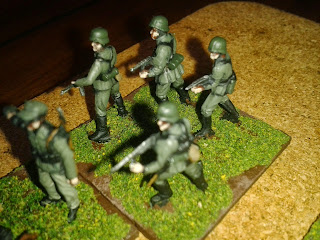 Quite a variety of manufacturers - Aifix (what is that gun he's using?! Looks a little like a Tommy gun!), Esci and Italeri.

Not the best on the 'net, but, so long as you don't look too close, they'll look ok on the table.