Thought I might post some old pictures of a early iteration of my DBA Numidians (Book II List 40 - II/40). These are all HaT 8024 Numidians Cav (with one HaT Celtic Cav rider with a Carthaginian head swap) with some HaT 8020 Carthaginian Infantry (specifically, the Numidians)...

Initially I designed the army composition...

...around the fact that DBA LH can make as many moves as PIPs you want to spend moving them.

So, I thought, lets have a Light Horse General, so, so long as the General goes along with the multiple moving LH, that group of multiple moving LH will not have to suffer the -1 "General out of contact" penalty.

And given that heavy foot can't kill Psiloi, just force them to flee to come back sometime later, I figured I'd also take the all Ps option and park them somewhere relatively safe while the LH did all the work - specifically by finding exposed flanks and exploiting them. So far, it hasn't worked out too bad.

Subsequent to these shots I have also added a Cav General, a Blade element and an Elephant to represent Juba's army. I've also added a wall of sand as a God, added another Bd, and classified Juba as a Hero to morph the army for HOTT!

Funnily enough, this is one of the my few armies that actually has an appropriate camp element! 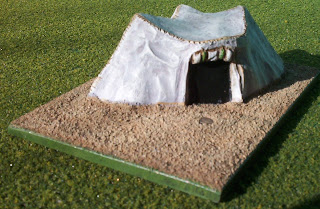 This was created, painted and based for my by Mike Hansen in Auckland. Very clever fellow is Mike.