...so to speak. Actually, they are in a box hidden away in the lounge easily accessible should I get the urge to paint... 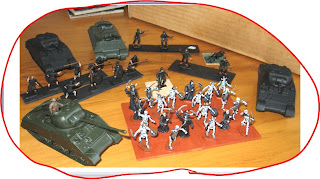 (This image has been reconstructed from a Word file...having lost the original image...bother it...)

As you can see, as well as some EIR Auxiliaries, and the never ending Skellies, I've got some 20mm WW2 stuff mixed in there.

I've just got interested in WW2 Gaming using the Crossfire set of rules. They make quite a change from DBA and offer the tactical possibility of "OK, now what?" which has not been my experience with Ancients.

With DBA, if your plan doesn't work, you basically haven't got the ability to redeploy half way through to try a different approach. With Crossfire, you can (I think - when I've got to the "OK, now what?" stage my initial advances had worked and the games were conceded!), so it offers a different set of tactical considerations.

Plus, you don't need much in the way of figures. The basic formation is a company consisting of three platoons of three squads each, plus company support (HMGs, Mortors/Forward Observers, Engineers and the like). I'm using 2 figures per squad + 1 for the Platoon Commander, 2 for the Company Commander. So, (2 x 3) x 3 + 3 and 2 and sundry figures = about a box full of 20mm plastic WW2 infantry. Cool!

So one box of ESCI WW2 American Infantry has given me enough for one full and one understrength (two platoons plus support) Companies.

Likewise, one box of ESCI WW2 Brits has given me one company of Kiwis in Italy.

Add a couple of Armourfast Tanks - 2 Shermans (either for the Kiwis or the Americans), 1 M10 (American) and a Firefly (Kiwi) - and that's all I need to get started. Stan has got the Germans. I just need another box of Americans and British to fill out their second companies and I'll have more than I need in the way of infantry.

Click here for some Crossfire inspiration. It certainly did the job for me!