Speaking of Skellies, here are a couple of shots of a very quick game my Skellies had against a 25mm metal Clasical Indian HOTT army (complete with a Hero, a God, and one very sneaky, sneaky lurker...). 'Twas all over in a blink of an eye. It went down something like this...

I was the defender, so I set my mounted (1 Hero, 2 Knights and 2 Riders) opposite his shooters, my infantry (4 Hordes) to the left of the hill upon which I had placed my Magician General, with a God (actually my Numidians' Wall of Sand ala The Mummy!) off stage right, waiting to come on.

The idea was to swing the mounted around past the shooters and into his cavalry in the centre where I thought I'd have the best odds. I was hoping for quick results with my Knights and Hero while the Riders valienly protected their flank, hopefully with the help of the God. 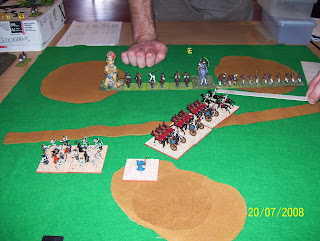 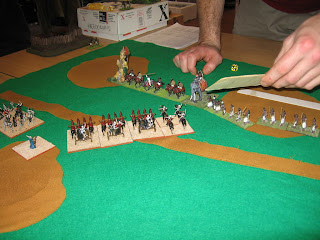 And that's pretty much where it ended! Suddenly a lurker appeared uphill in contact with Magician General, rolled high and that was that! I lost my General, lost the game, and learnt a lesson - don't deploy your General in terrain!