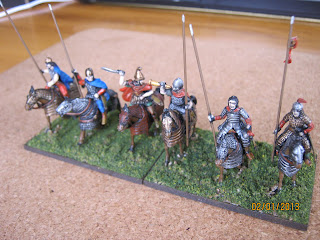 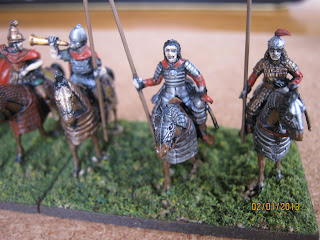 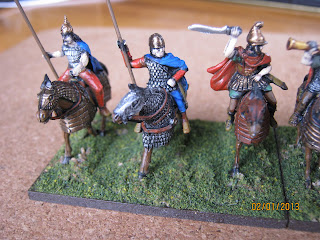 A mix of Italeri Mongols (in fact, all of the horses are from the Mongol set, 'cept that one from Evolution), a couple of Mongol riders, a Newline Roman, a Zvezda Macedonian (hey, I figured that they'd use what ever armour they had at hand...? Might have made more sense to replace the head with something less...Greek...), a HaT Carthaginian and a Revel-Praetorian-torso-on-Esci-Napoleonic-legs-with-an-Italeri-Gaul-head-and-paper-cloak.

This was all before Strelets brought out their own Sarmations, that Paul from Paul's Bods painted up here.

I'll get some later to replace some of these Mongol horses and a few riders...though their shields will have to be cut off their backs and the mess hid with paper cloaks.

The rest can be used as Scythians. 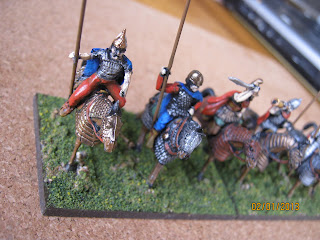 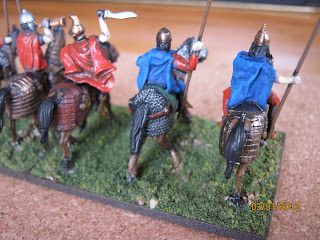 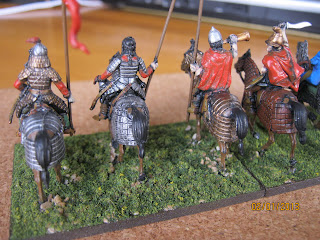 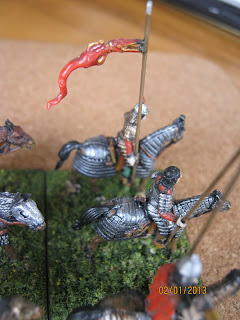 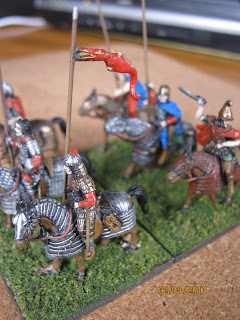 Oh, and that's a Revel Saxon Draco. Should have painted it nicer, but, well, I'd like to get through this army if I can before going back to work.

Right, on to the next two elements.

I've got those HaT Late Imperial Roman Medium Cav put aside with additional Light Cav to replace the bulk of those half barded horses...so...presto!

I can replace some of those Mongol armoured horses with those HaT ones, along with some HaT LIR Catafracts horses that I'll have left over when I've made those three 4Kn elements for the East and West LIR armies.

So now I have to pull these elements apart to swap out some horses!
Posted by Nick Grant at 12:30