Yesterday Stan came round at lunchtime for another quick DBA bash (no pictures!) in an effort to practice for the 15mm DBA competition during the War Clouds Over Wooston event during Waitangi weekend here in Christchurch. He wanted to experiment with a Book IV, Anglo Irish army list (IV/26a) that he's taking to the comp. Seeing as I don't have any DBA armies in 15mm, but a fair heap in 20mm, I pulled out elements of my yet-to-be-painted Norman and Saxon armies as proxies. 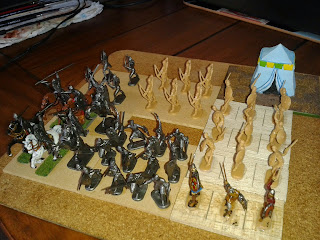 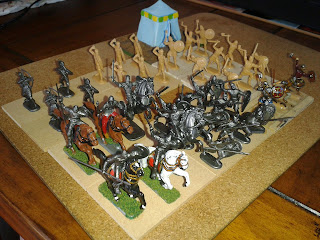 That resin tent was made for my ages back by a very clever lad in Auckland, Mike Hansen. You can see some of his work here and here, from my old geocities site back in the day. 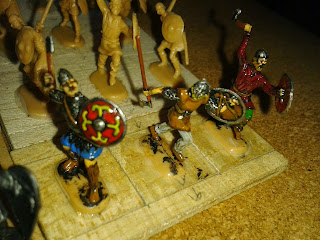 And this is my one painted element that I did for my son Matthew when he was doing a speech at school about Vikings! A visual aide, so to speak.

So anyway, yesterday these "Anglo Irish" went up against my [Italeri Saracens] Syrian army (IV/6a - 5 Cv, 4 LH, a Horde, 2 Ps and an Ax). The Horde never managed to crest the steep hill it was deployed behind they moved so slow!

I won, primarily thanks to the Cav/Bw matchups - the fact that when doubled by the Bw, the Cv just fleed...flew...flied...what ever the past tense of flee is - oh, hang on, it's fled! - and then came back. Eventually, despite being a factor down, I won those matchups because mounted in contact quick kill bow.

It also helped that my Ps also ran when doubled by his foot, and a lucky quick kill of my LH (with overlap support) against one of his Knights. 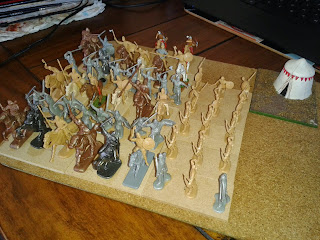 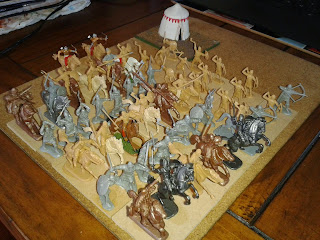 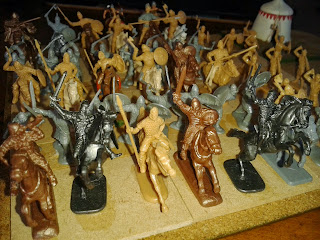 I'd pulled together this HOTT Rohan army (9 Kn, 1 LH, and 2 Sp) because I had spare mounted Revell and...Strelets, I think, Normans, as well as a bunch of spare Napoleonic horses, Revell Saxons that looked kinda Rohirmish...and a couple of spare HaT EIR Equites!

'Course it's now kinda superfluous as I've got my HOTT Sarmatians to go up against my Raetian Goblins. So I'm pleased I can use them for this list at least!

And since I had my toys out anyway, I thought I'd literally pull together another Later Carthaginian Spear element - with a few head, and one leg swaps with some other spares, since I'd used the Cart heads (and torso) for earlier conversions. Probably my Macedonians - I needed some Greekish looking head gear, if I recall. 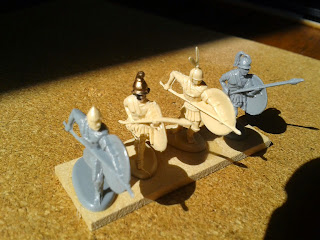 That makes 6 Later Cart spear elements, should I ever want to try them as a double DBA army. Or Warmaster Ancients, perhaps allied to my Numidians...

So many toys, so little time to paint them!

Speaking of which, back to the EAPs. Got one more Sarabara element almost done. Almost.