The Three Big Toys Come Out To Play

Last night I popped round to Bruce's place for an X Wing bash. Sans X Wings.

Since I'd been fiddling around with a 60 point list I'm thinking of taking to the War Clouds Over Woolston X Wing Miniatures Game Escalation event, I thought that we could play a pseudo-scenario. An Outer Rim Smuggler teams up with a Bounty Hunter (that's 60 points right there!) to rescue a compatriate who's being whisked away by Admiral Chiraneau in the Dauntless... 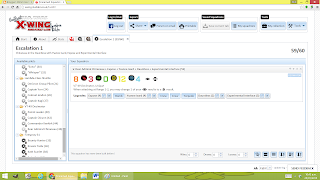 (I don't have the Experimental Interface card, so I was using Push the Limit instead - a very similar effect, same point cost.)

The idea that I pulled out of my ar#$ on the way over was that, just before the Dauntless blows, the captive would "hit the silk" - bail out in an escape pod. The same applied to the Fringe - if one blows up, they can jump into an escape pod to be picked up by the other. Or by the Dauntless.

To rescue the pod the rescuing ship has to fly within Range 1 and then forfeit their attack. A bit like the escape from Bespin.

Anyway, Bruce, James (his old Massey mate from back in the day) and I squared off (if you can square off with three...), I taking the Dauntless, James the YT and Bruce the Firespray (my first outing for my Firespray - I had just picked it up that morning)...and away we went. 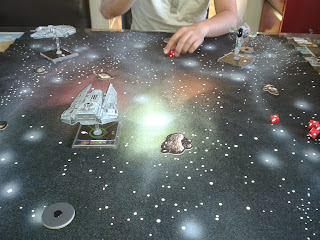 Some early concentrated firepower on the Outer Rim Smuggler... 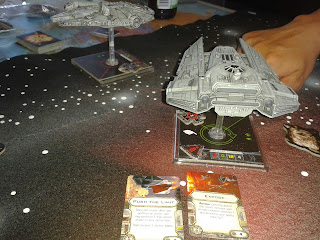 ...saw it's shields stripped and chunks taken off the hull.

Not wanting to bash-the-newbie (James having not played before), I then start picking on Bruce, while James flew away north to set up for another run. 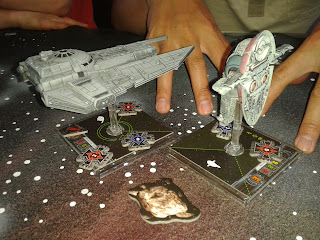 (All the fingers in these shots are James'!)

Bruce K Turns behind the Dauntless...but I shoot first! 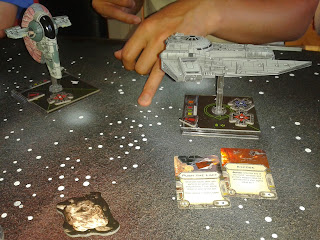 And again. These card combinations are awesome! 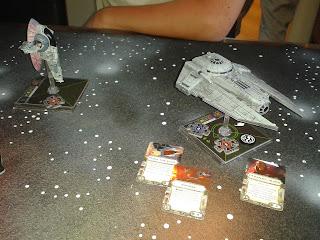 (Having said that, I estimate that the Vindicator can only last about four or five turns in any given game, taking, as it does, anywhere from, say, three to five hits per turn from an average two ship list. I was lucky in this game - the YT was out of range for a couple of turns, and, above, Bruce got a crit - Blinded Pilot. He couldn't shoot for this turn.)

In the meantime, the smuggler tries to get back into the action. 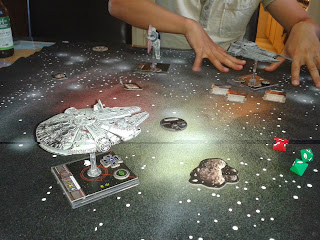 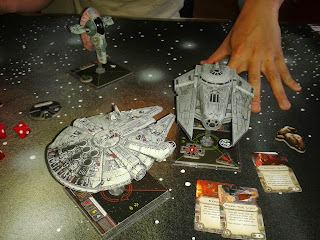 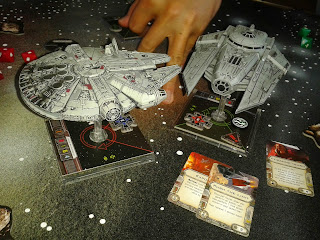 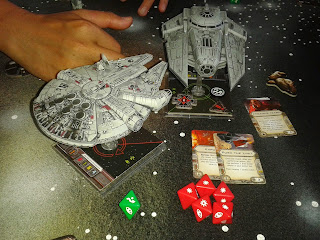 ...Bazinga! Four hits plus a crit thanks to Expose, Experimental Interface and Target Lock re-rolls!

James tries to fly over the Dauntless...but can't... 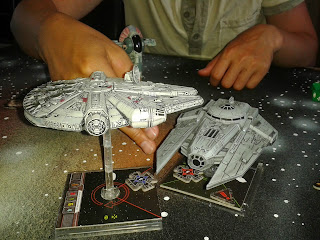 ...Bruce tries to get up close and personal... 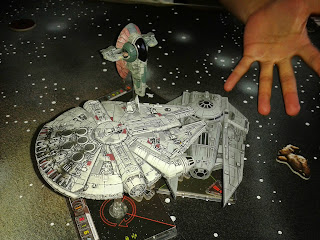 At this point the YT has only one hull left, and, again, not wanting to be that guy who picks on the newbie, I target Bruce instead. 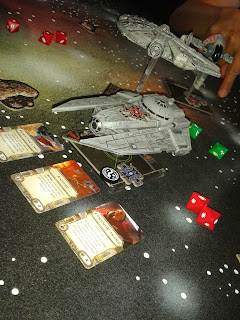 Again, the boys try to catch up... 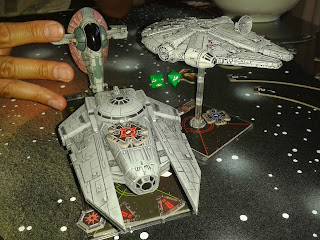 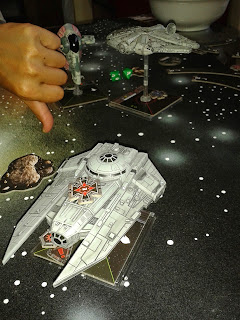 Taking out the YT as I pass. 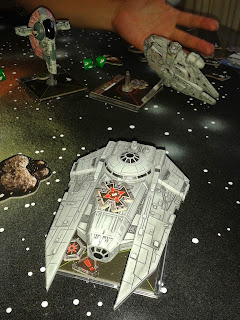 Prompting some debris (I'd only put out five asteroids for this very reason - six asteroids + debris gets quite crowded on a three foot mat), and...an escape pod! Which can move straight or gentle ones, and has an agility of one. 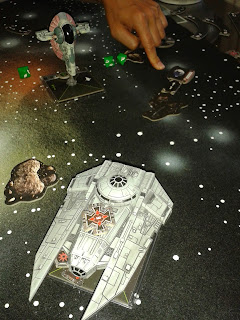 Bruce tries to veer away... 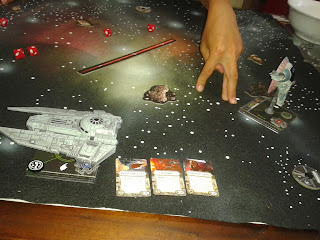 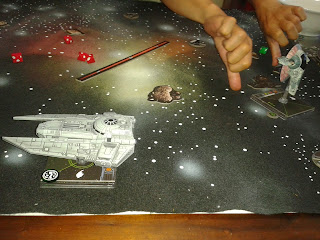 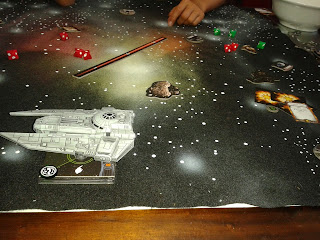 Thinking further about the scenario...

The Fringe player can launch the escape pod from the Dauntless (with the Fringer captive in it) at the start of any turn after the Devastator looses it's shields - a bit like a bomb... 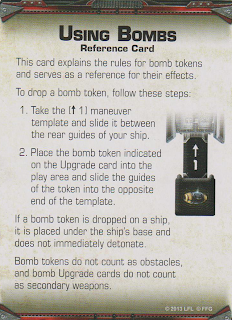 ...but place the escape pod instead of the ordinance. The the "mother ship" then moves on, as dialed.

However, the captive can only try to escape in the escape pod once. Once launched, the Dauntless can then, of course, try to pick it up again, in which case the Fringer is in custody for the duration.

The escape pod moves using straight of gentle [1]s, and has an agility of one.

The Escape Pod is picked up by flying one of the big ships into Range One of it, and choosing to pick up the pod instead of launching an attack.

Further more, the Fringe player can choose to abandon one of their ships any time before it is destroyed, hoping for the other Fringer ship (and hoping not for the Imperial ship) to pick it up.

The Fringe player wins the scenario if it picks up the escape pod with the ex-Imperial captive inside and then escape by flying off the Fringe side of the map/mat. (It is possible for the captive to escape the Dauntless, be rescued by one Fringer ship, who then abandons ship for the other Fringer to rescue all and sundry and then fly off the map...)

The Imperial player wins by destroying the two Fringe ships.

Now I've codified it, I need to play it again. Properly, this time!

Anyhow, after the game, Bruce rocked out King of Manhattan... 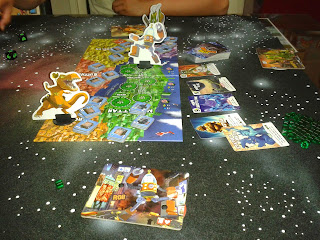 ...and then King of Tokyo, which he convincingly won four times on the trot!

Well done Bruce, and thanks for the games James, they were a lot of fun.