Yay, school holidays, I finally have some time to hobby!

Last Sunday, as per my previous post, I participated in the Comics Compulsion X Wing Miniatures Game Store Championships. I came in the middle there, and got some cool acrylic focus tokens.

Alas, my phone's battery ran out and I was only able to fully document my first game. The one in which I was completely done over!

Anyhow, I was keen to take my Firespray, that I hadn't flown before, so, who else to take but Boba Fett! 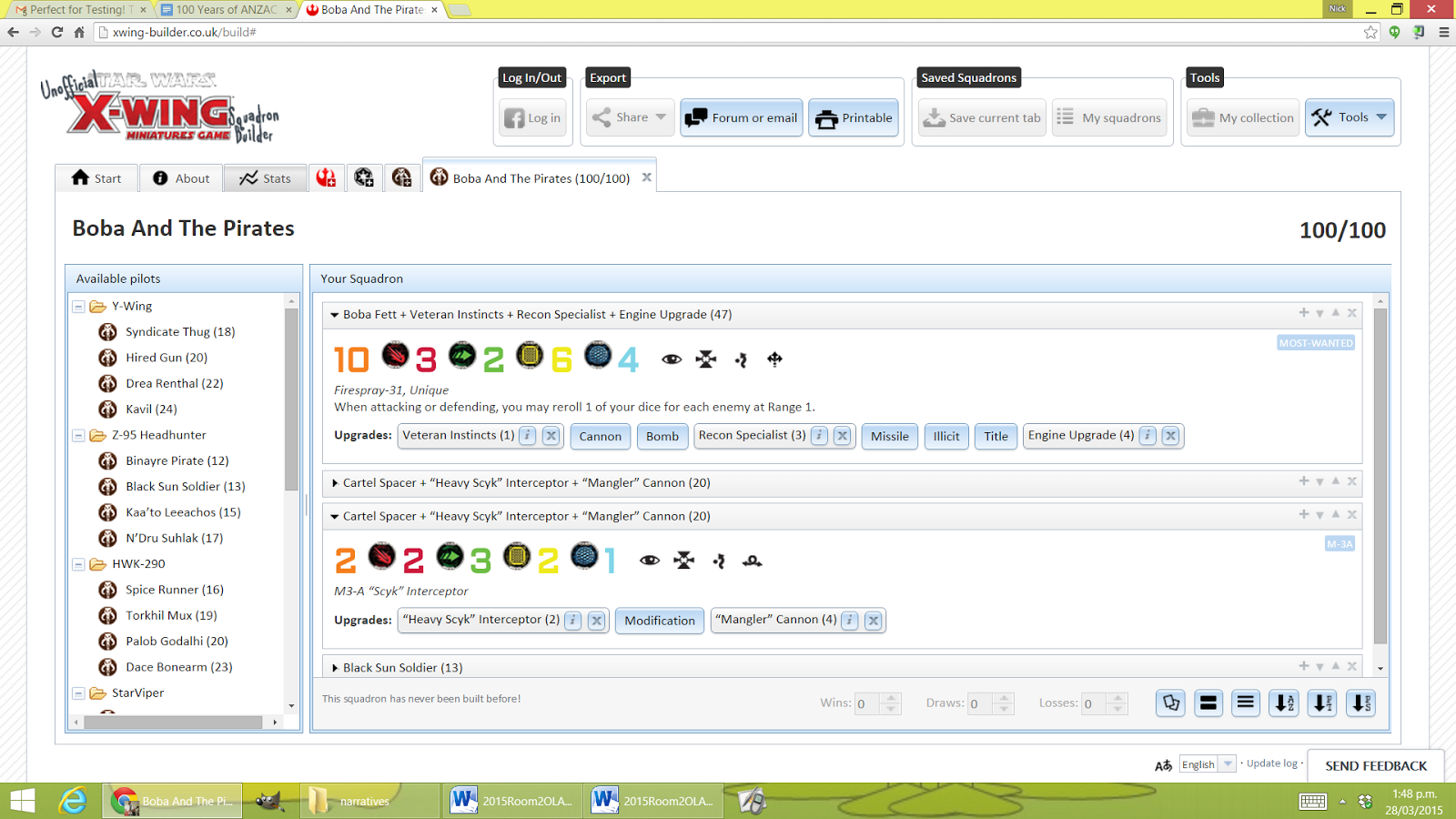 This was also to be my first time using Mangler Canons. They spun out the price of my M3s to 20 points each, but I could still manage to field a fourth ship, a Headhunter, so...away we went.

My first game was up against Ben who was flying a Doom Shuttle (one with Vader on board - the Big V can inflict two damage to his own ship to inflict one on the enemy), a couple of Academies and a Saber Squadron Interceptor.

I decided to fly Fett through the asteroids, have my M3s joust with the Acadamies, and my Zed was a kind of flying reserve. 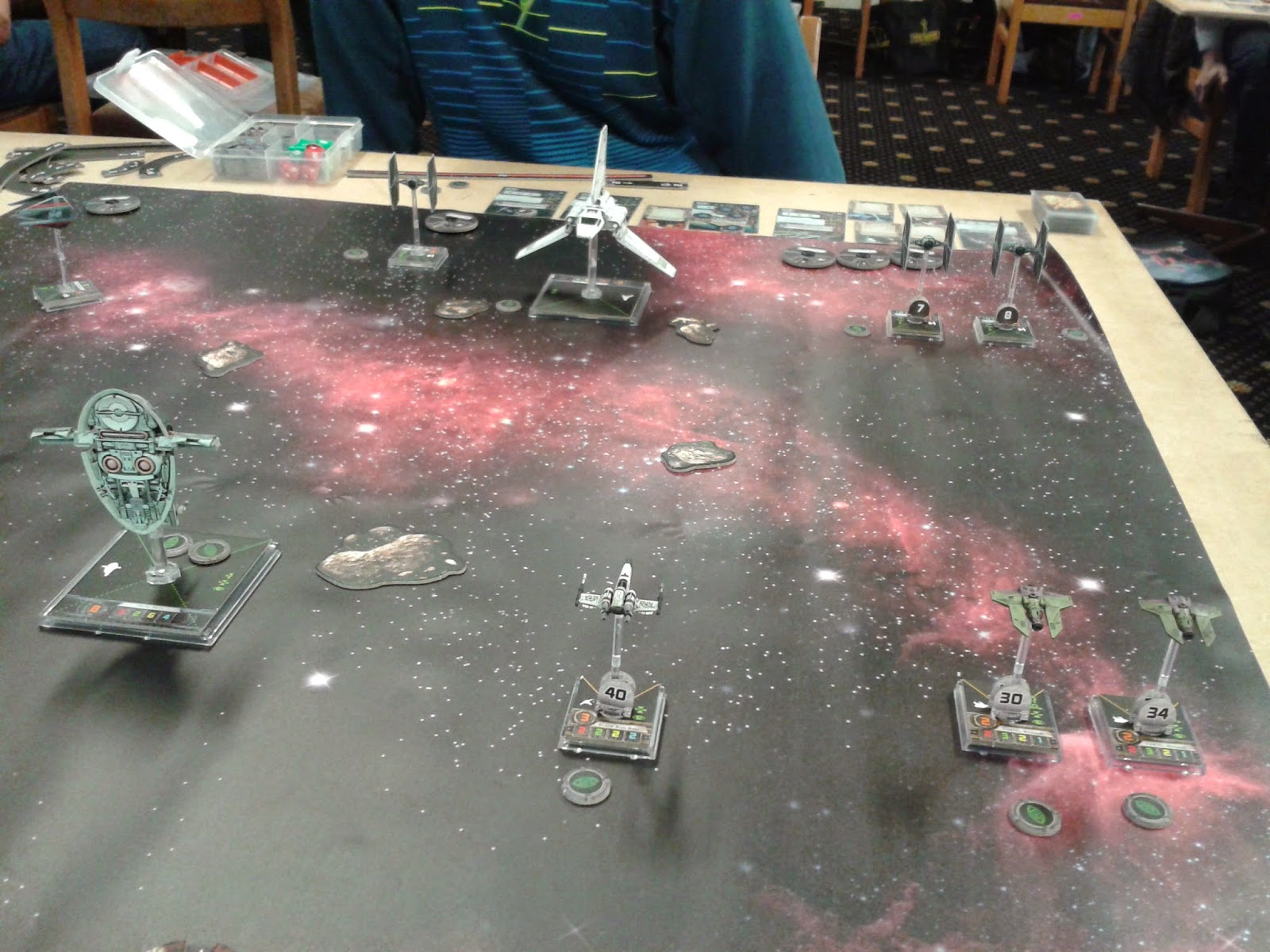 First round of shooting... 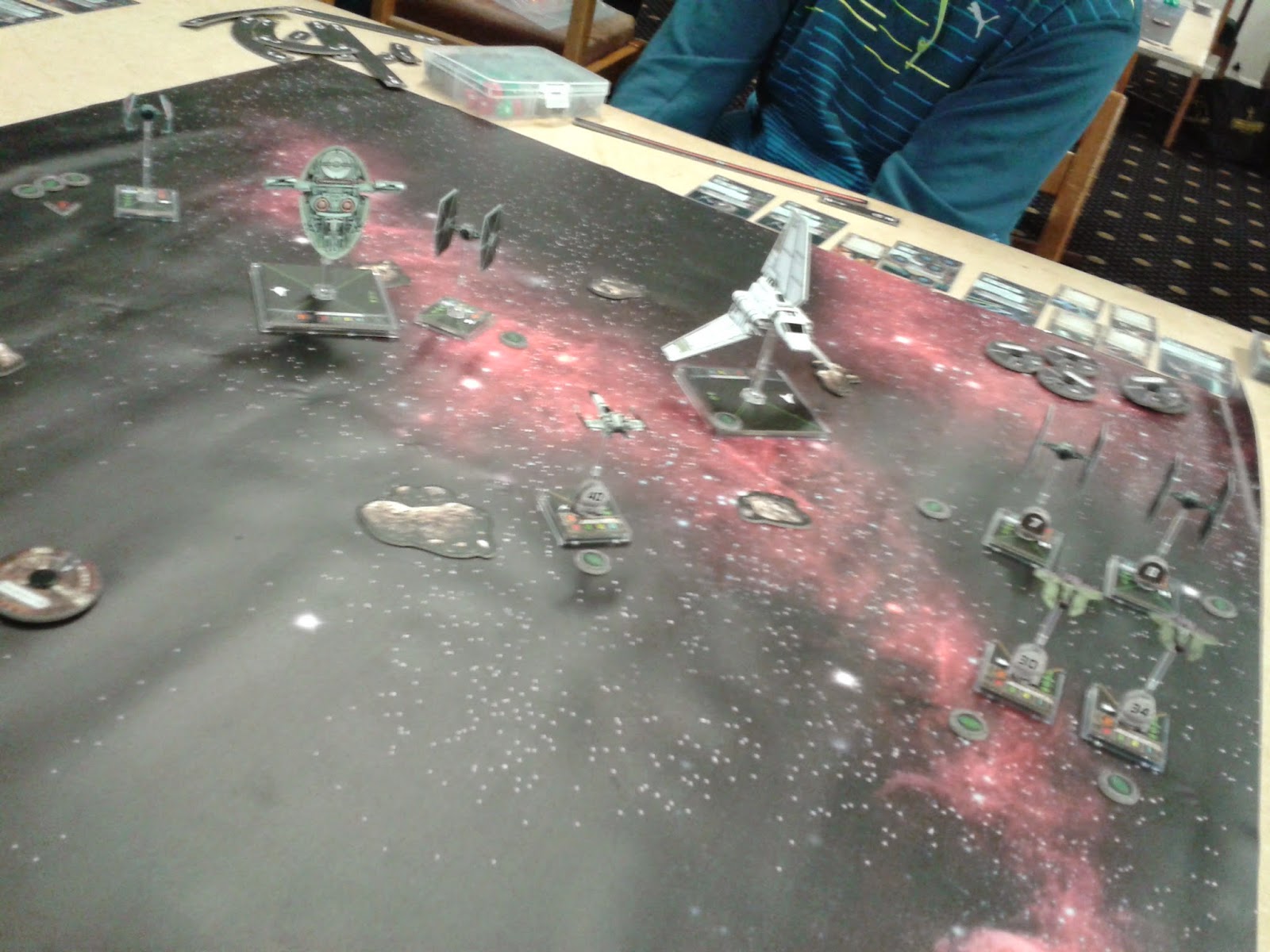 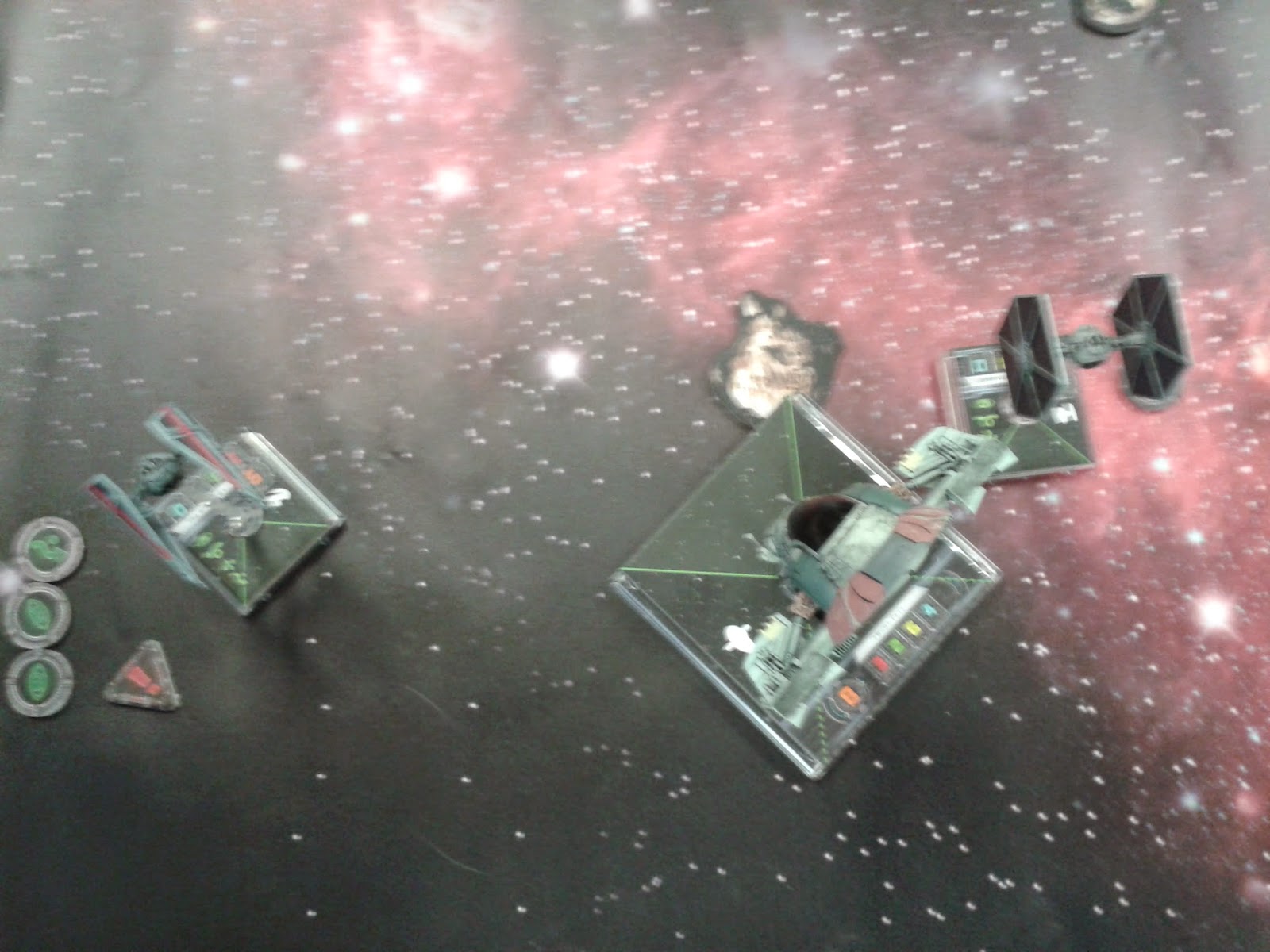 ...and Fett lands on a 'roid, denying him a chance to shoot. Arghh!

Next round, and Fett is still out of the fight, as I thought a Firespray could do a one sharp turn, like the Falcon. Alas, it can not.

The jousters pass and turn back, however... 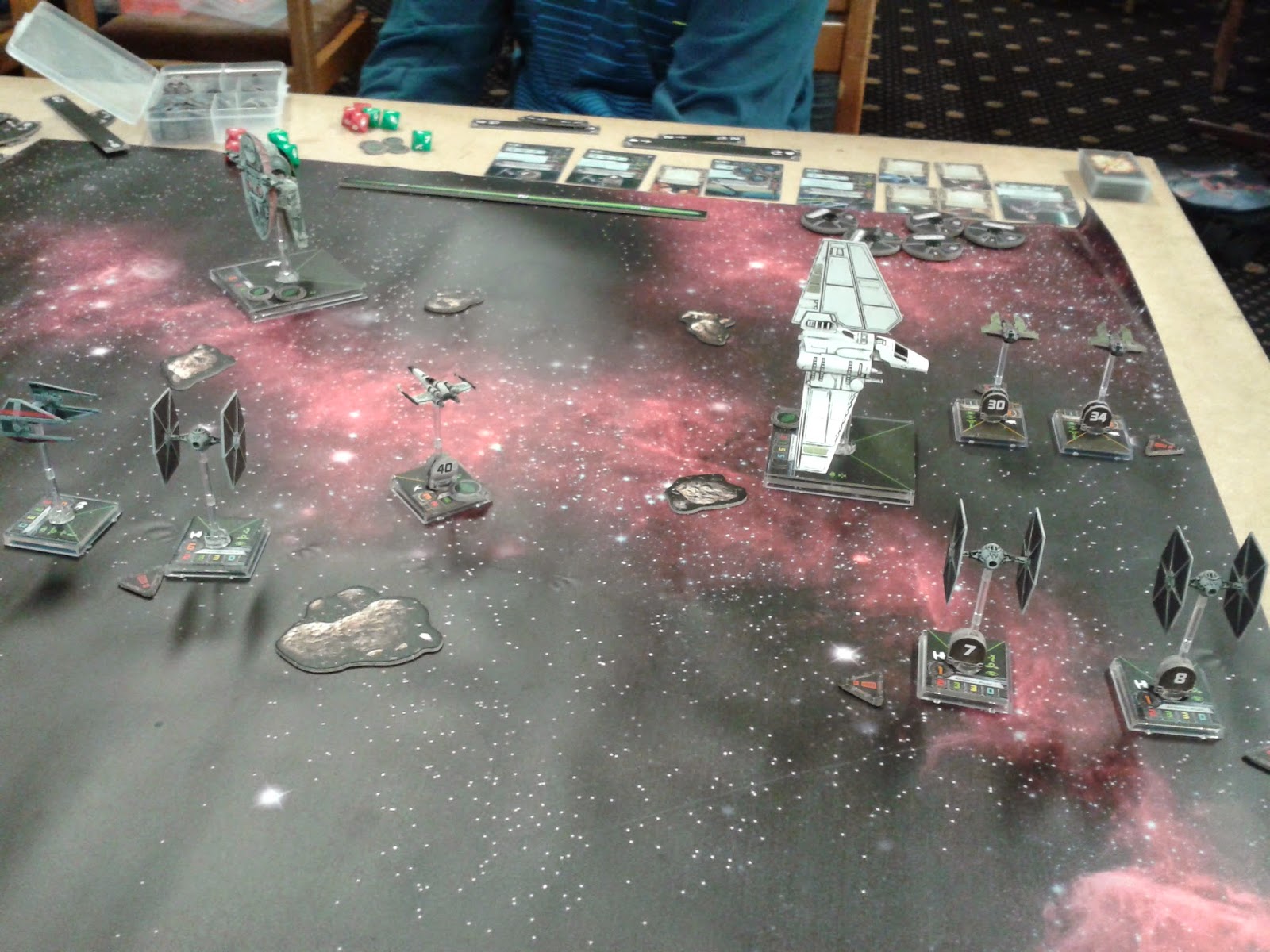 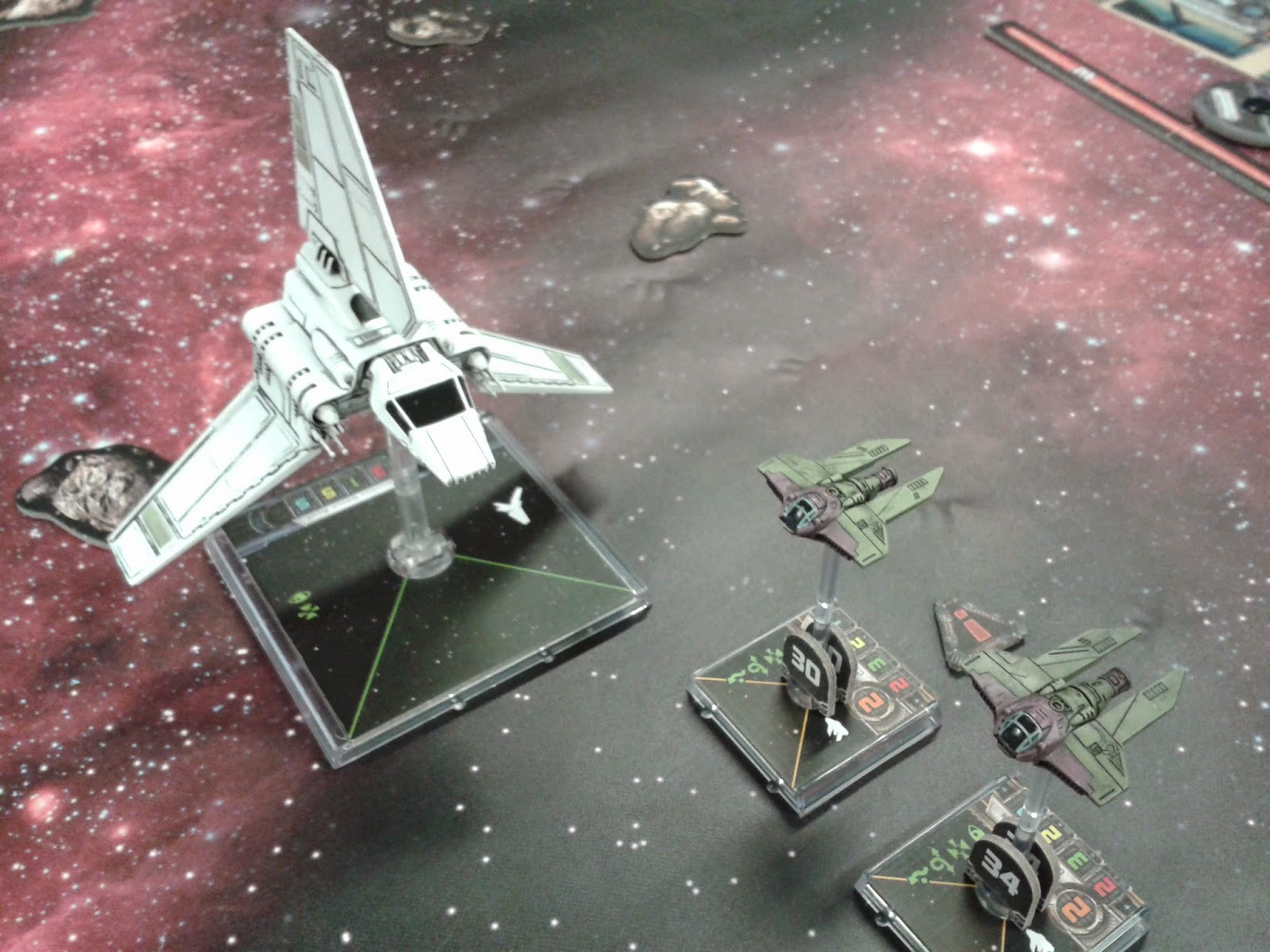 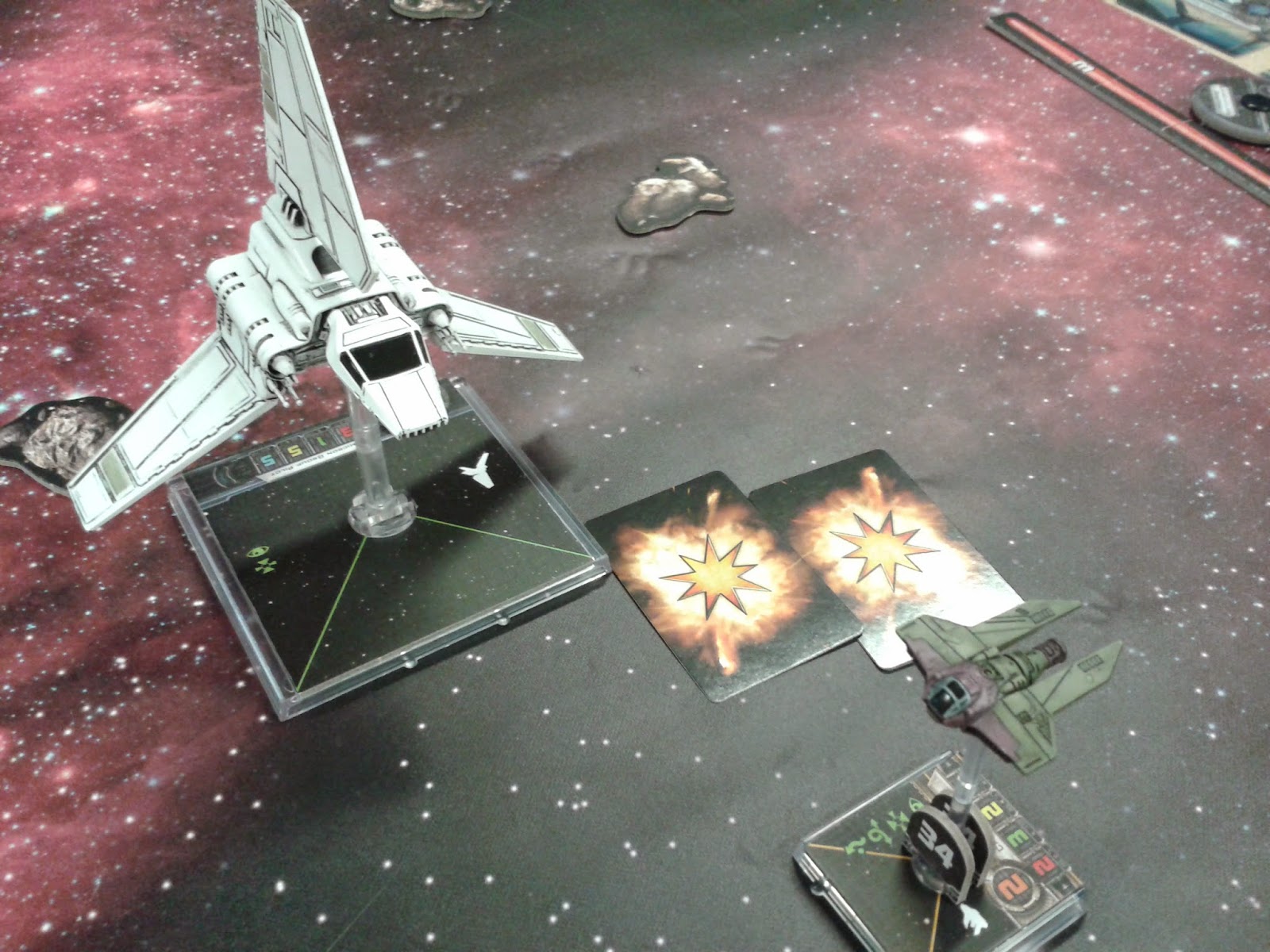 ...one of the pilots cried out in terror and was suddenly silenced. I fear something terrible has happened... 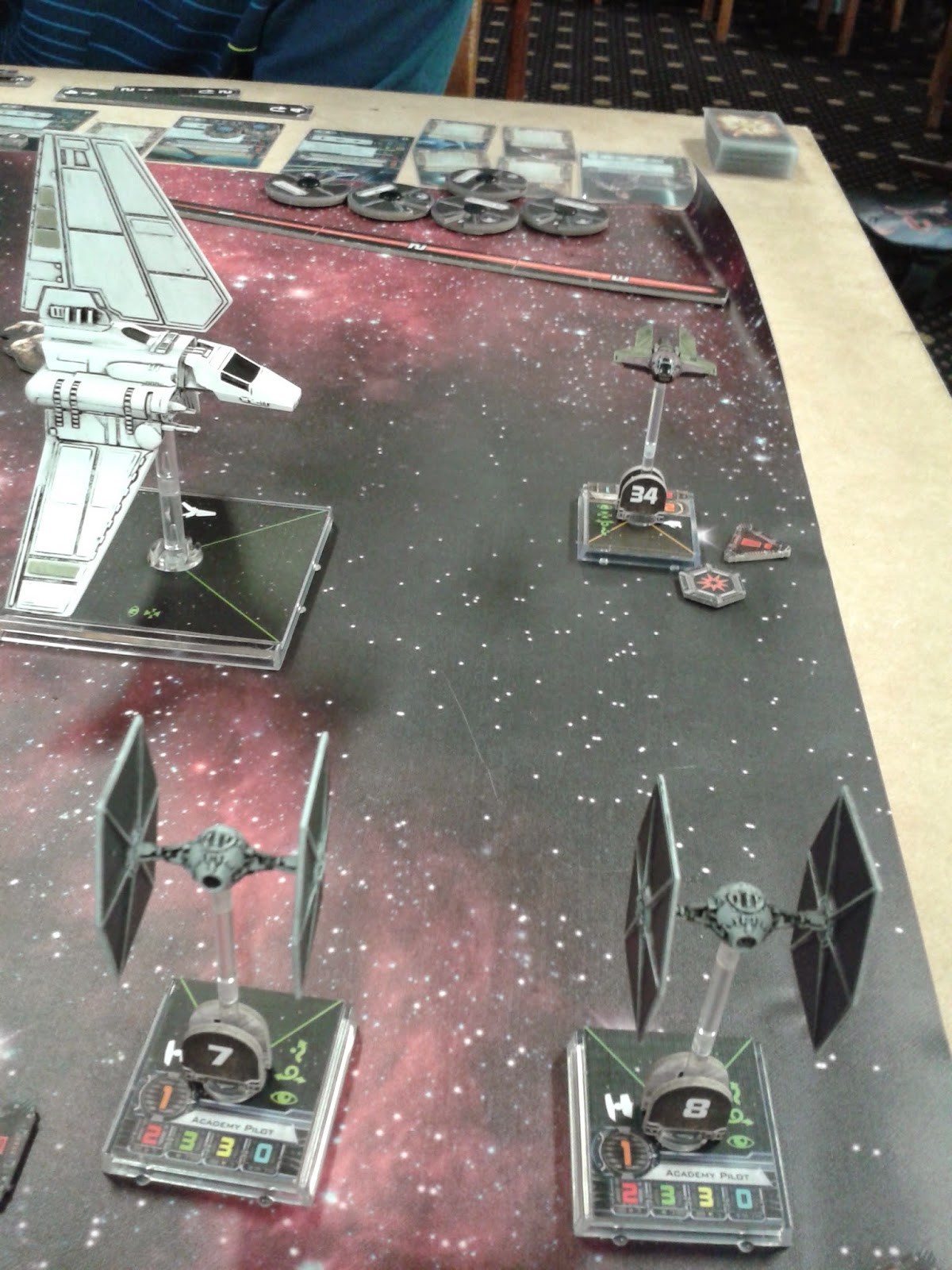 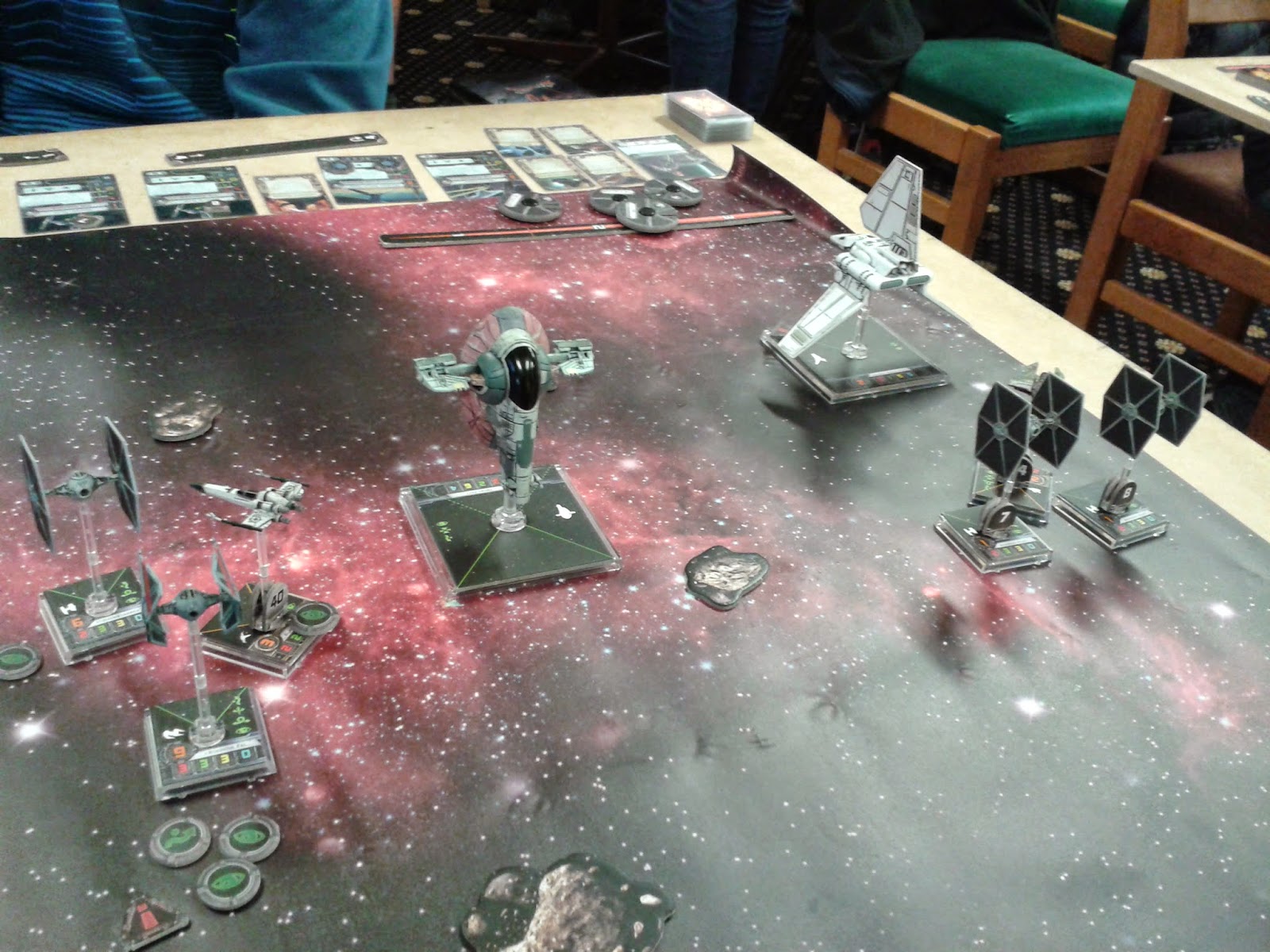 ...again spun on it's heels behind the Academies... 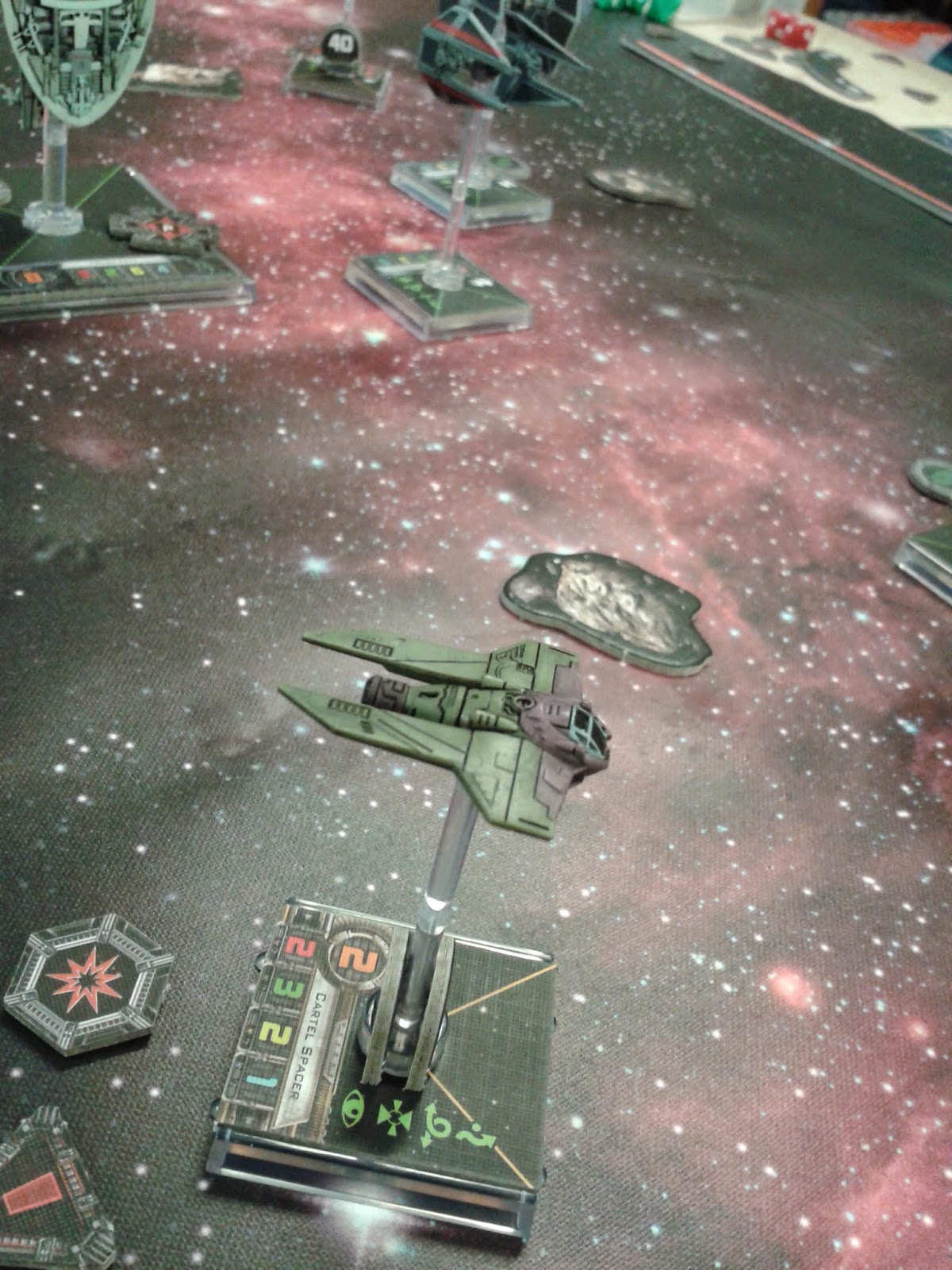 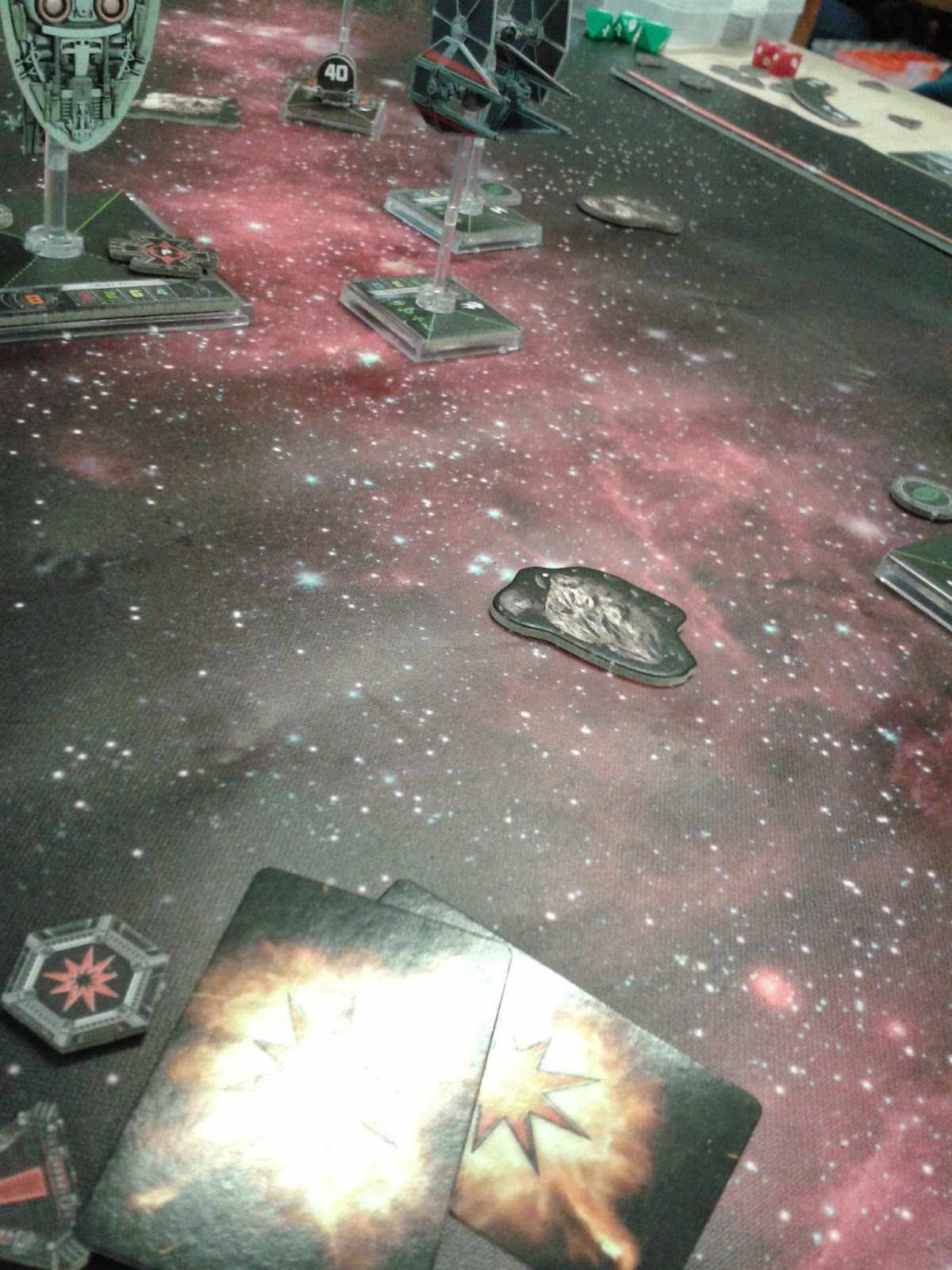 ...only to be taken out by the Saber Squadron pilot. 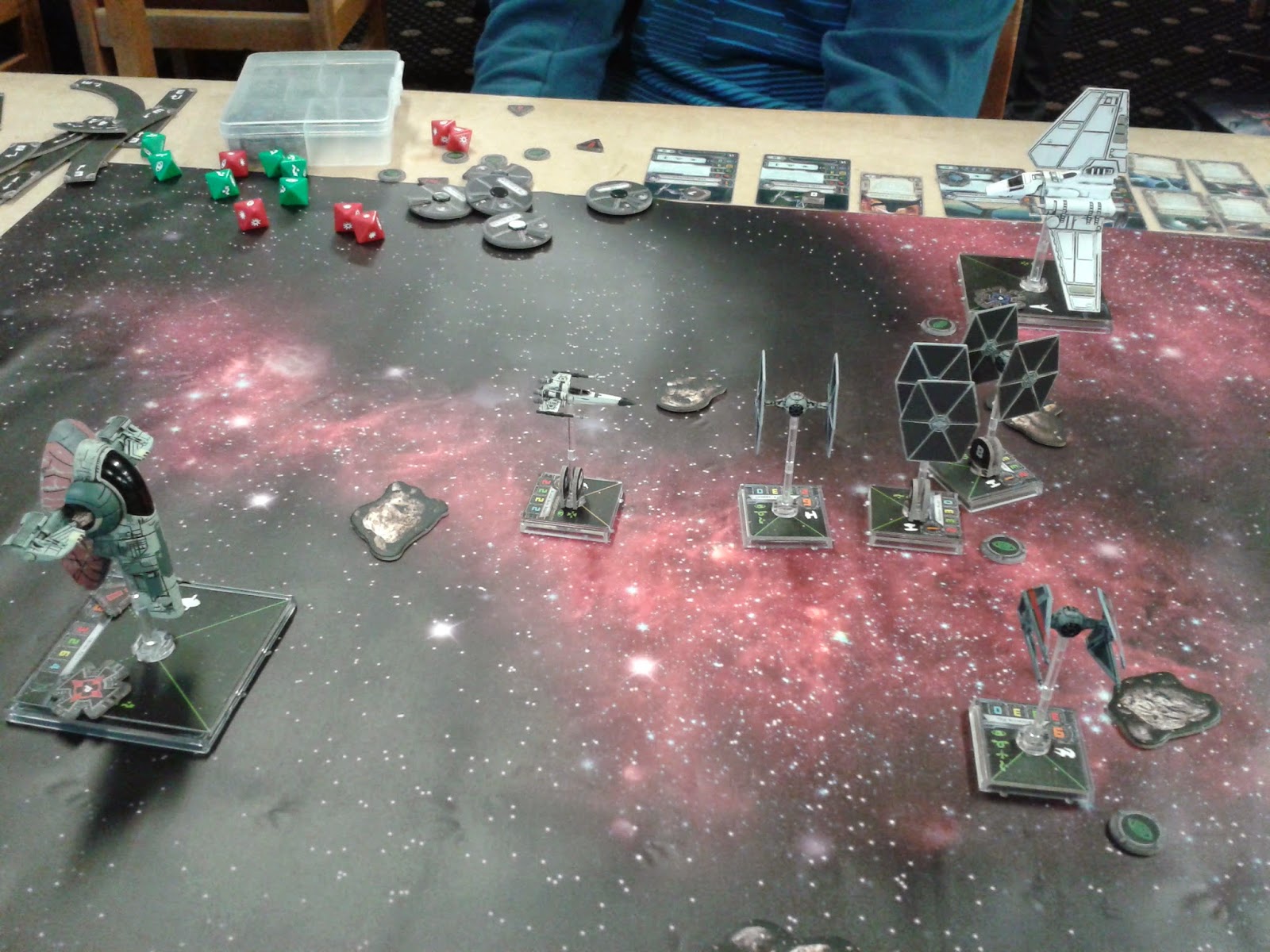 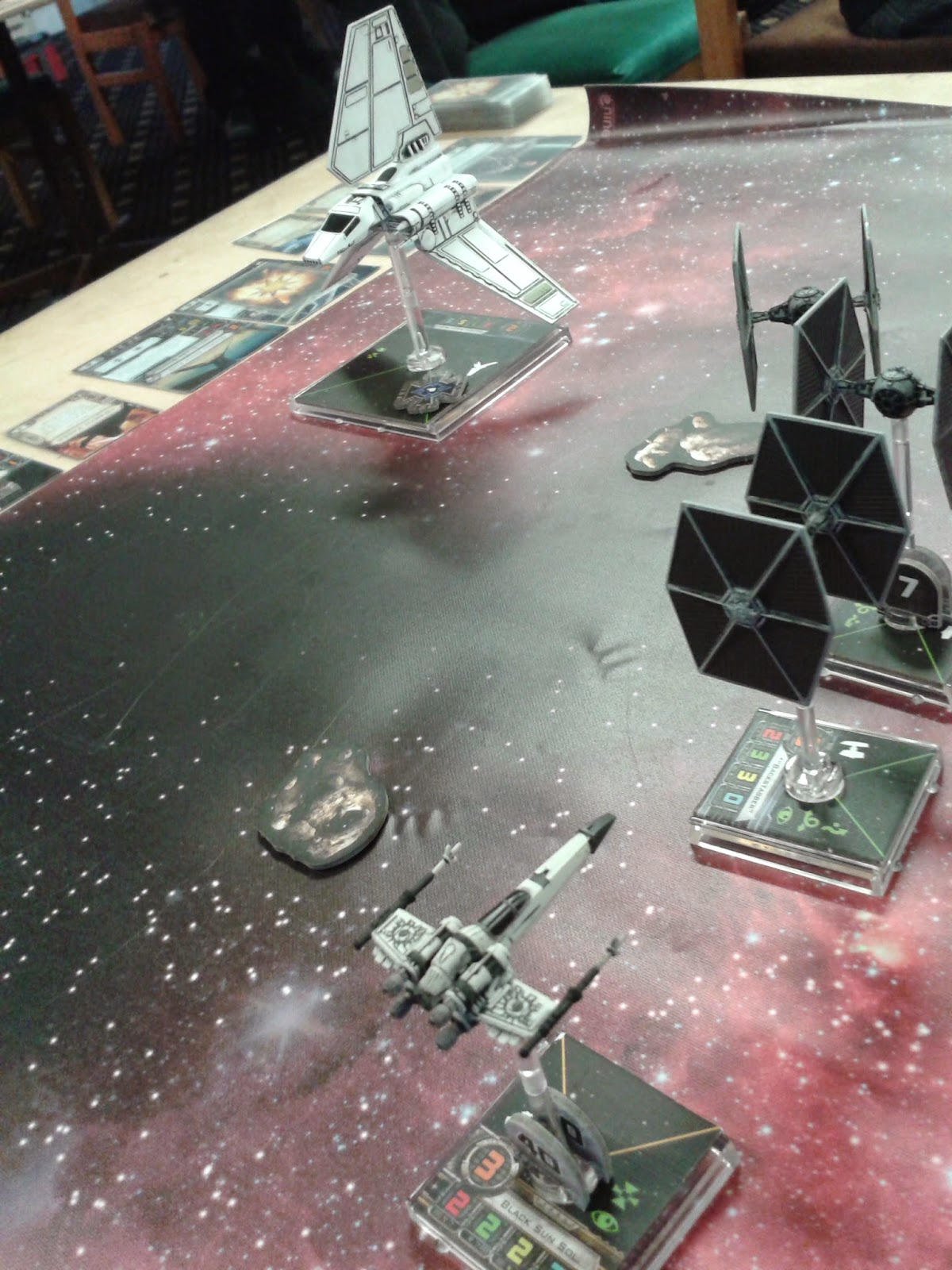 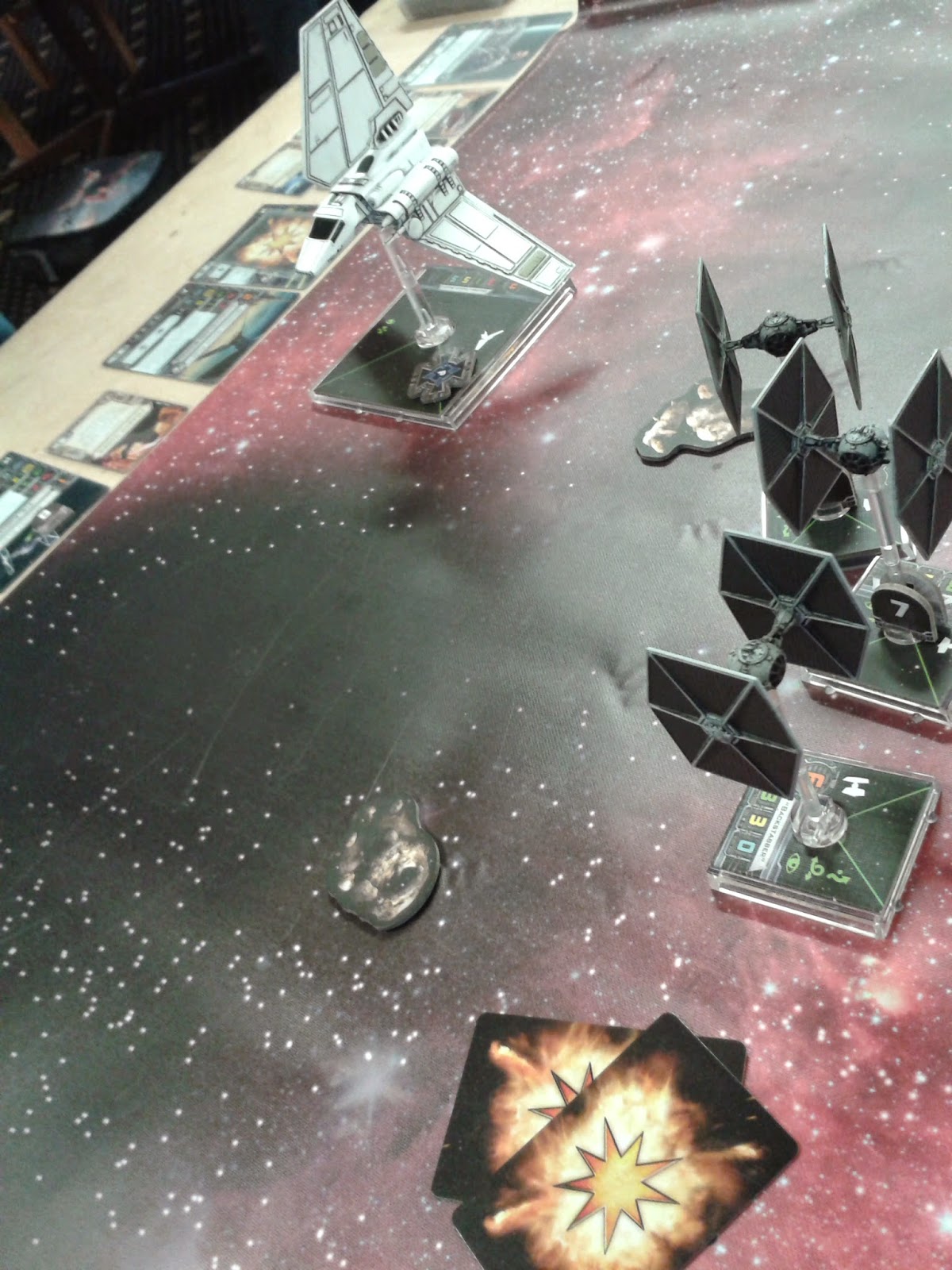 Stink! That's two that dratted shuttle has taken down.

Still, Boba gets attack and defence re-rolls for each enemy at Range 1. 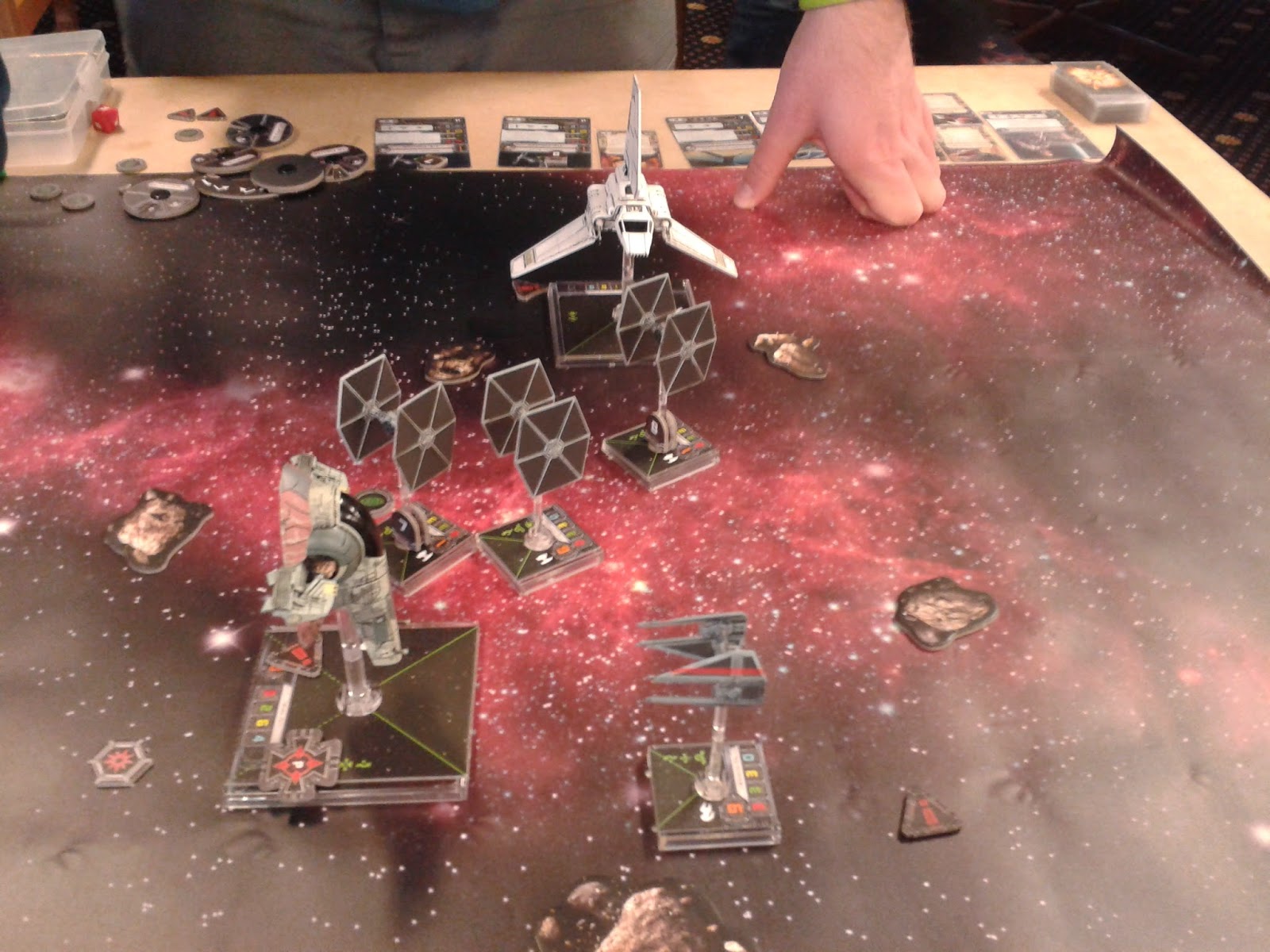 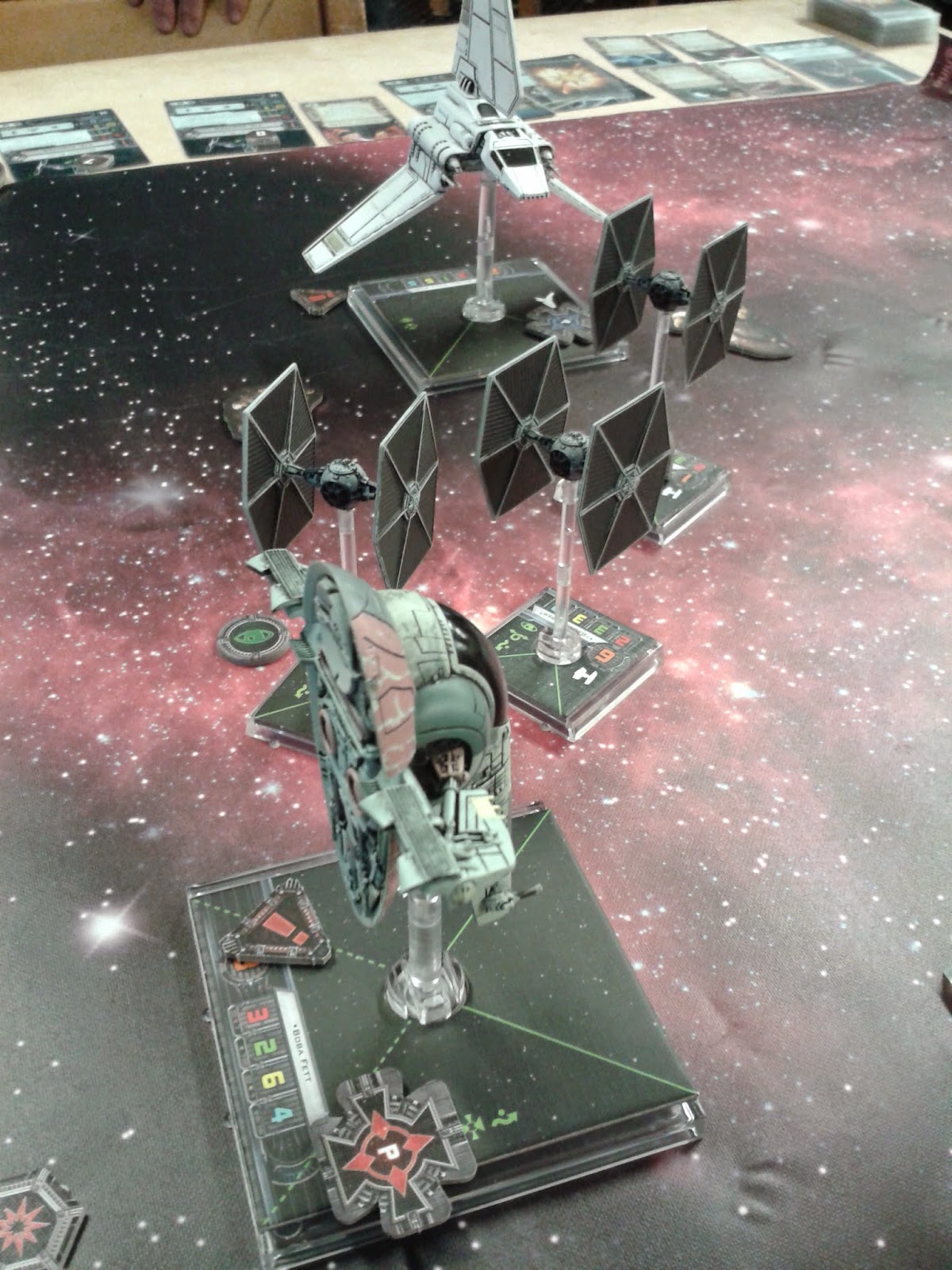 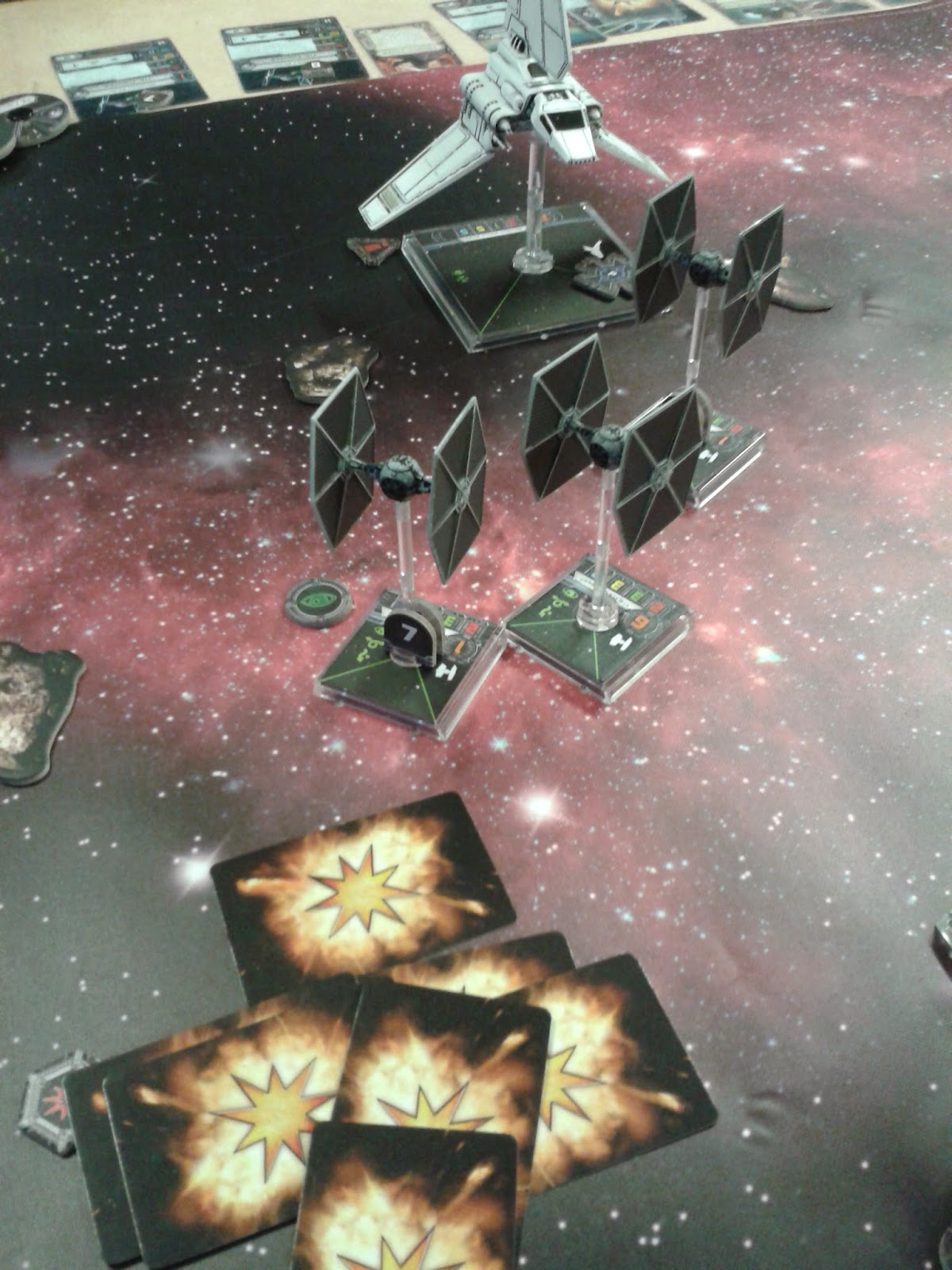 And that was the end of that. Not being able to attack with Boba for those first two rounds of shooting really cost me.


Then onto game two against Jonathan. And a Doom Devastator. 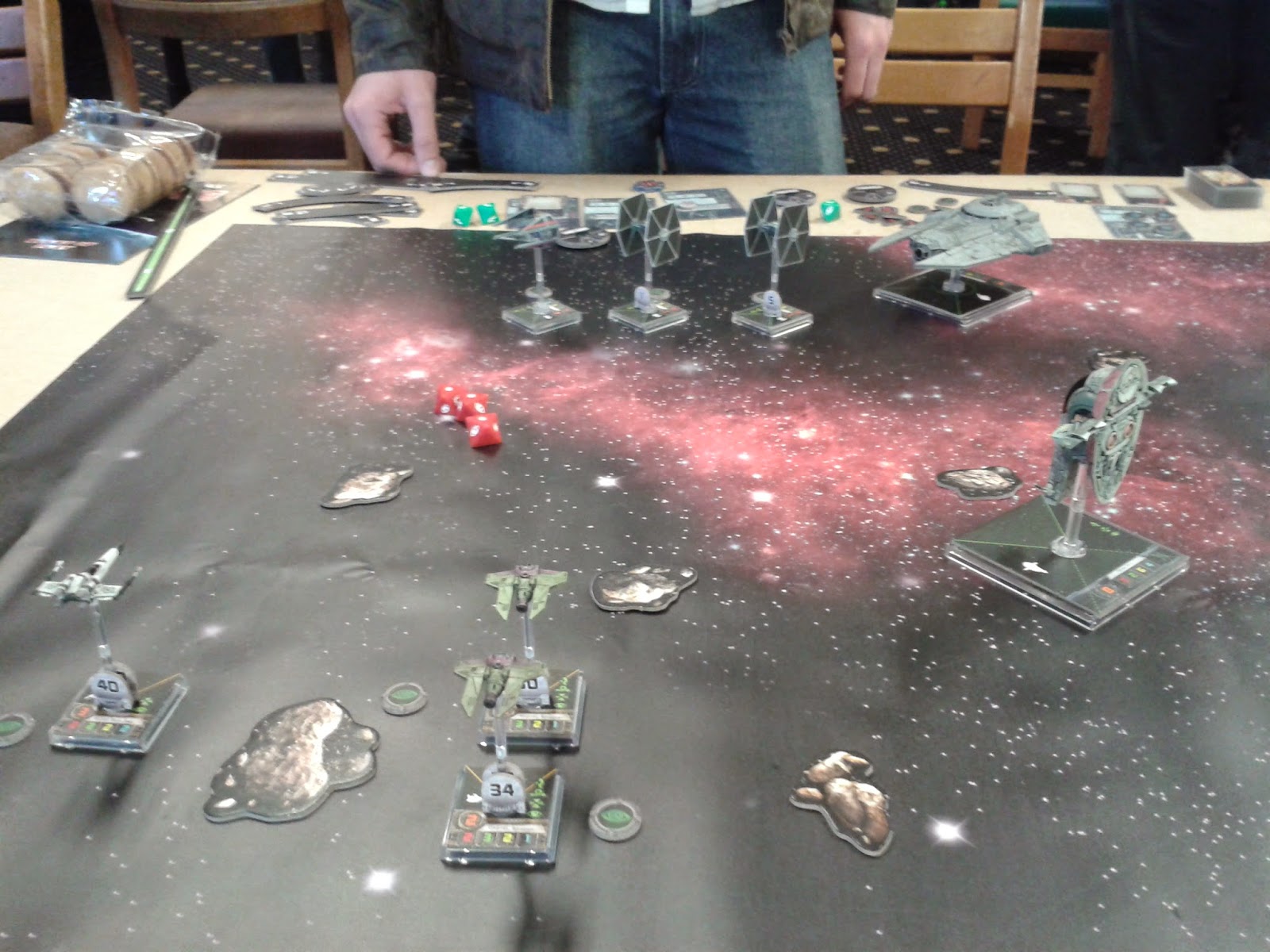 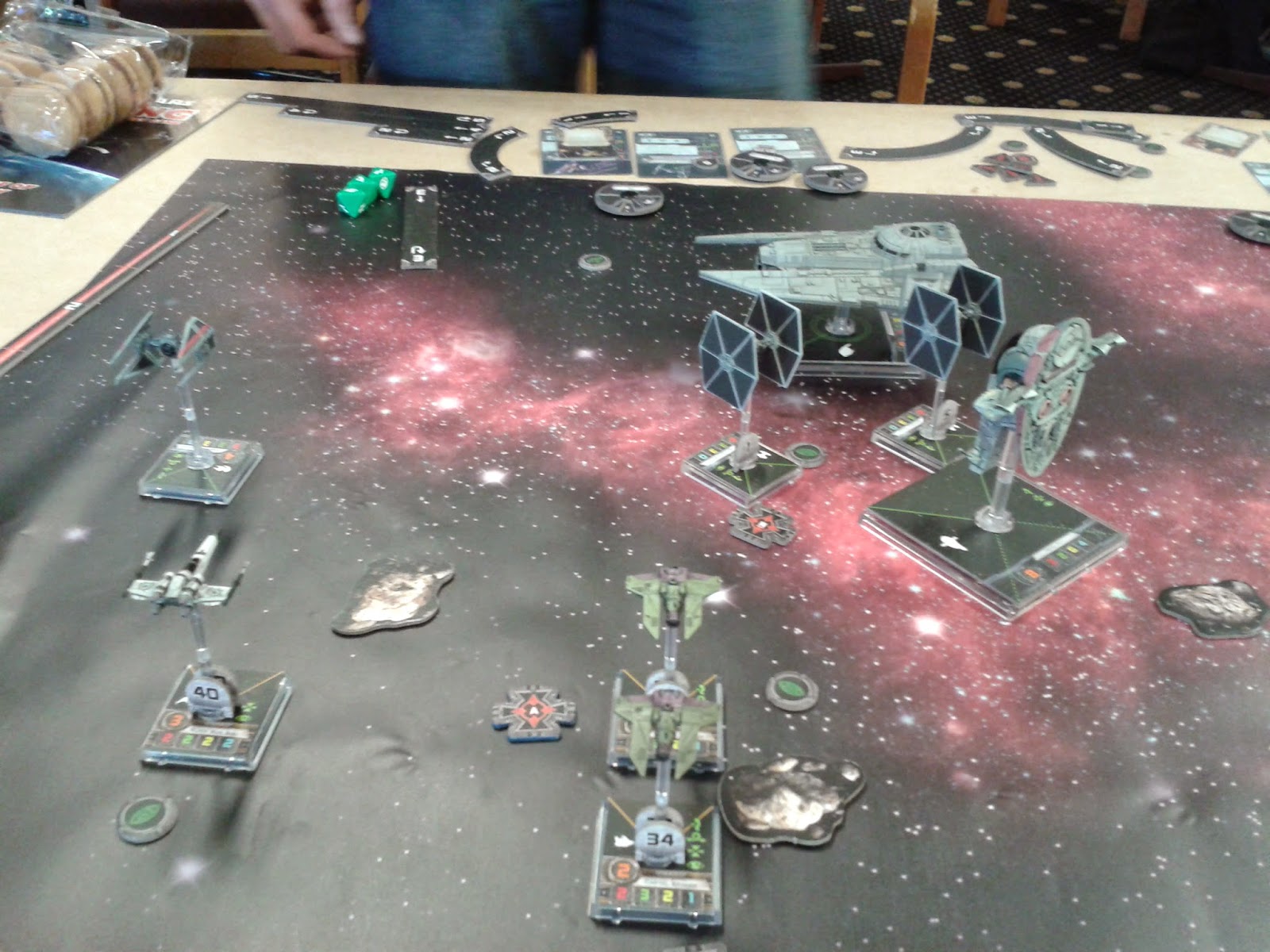 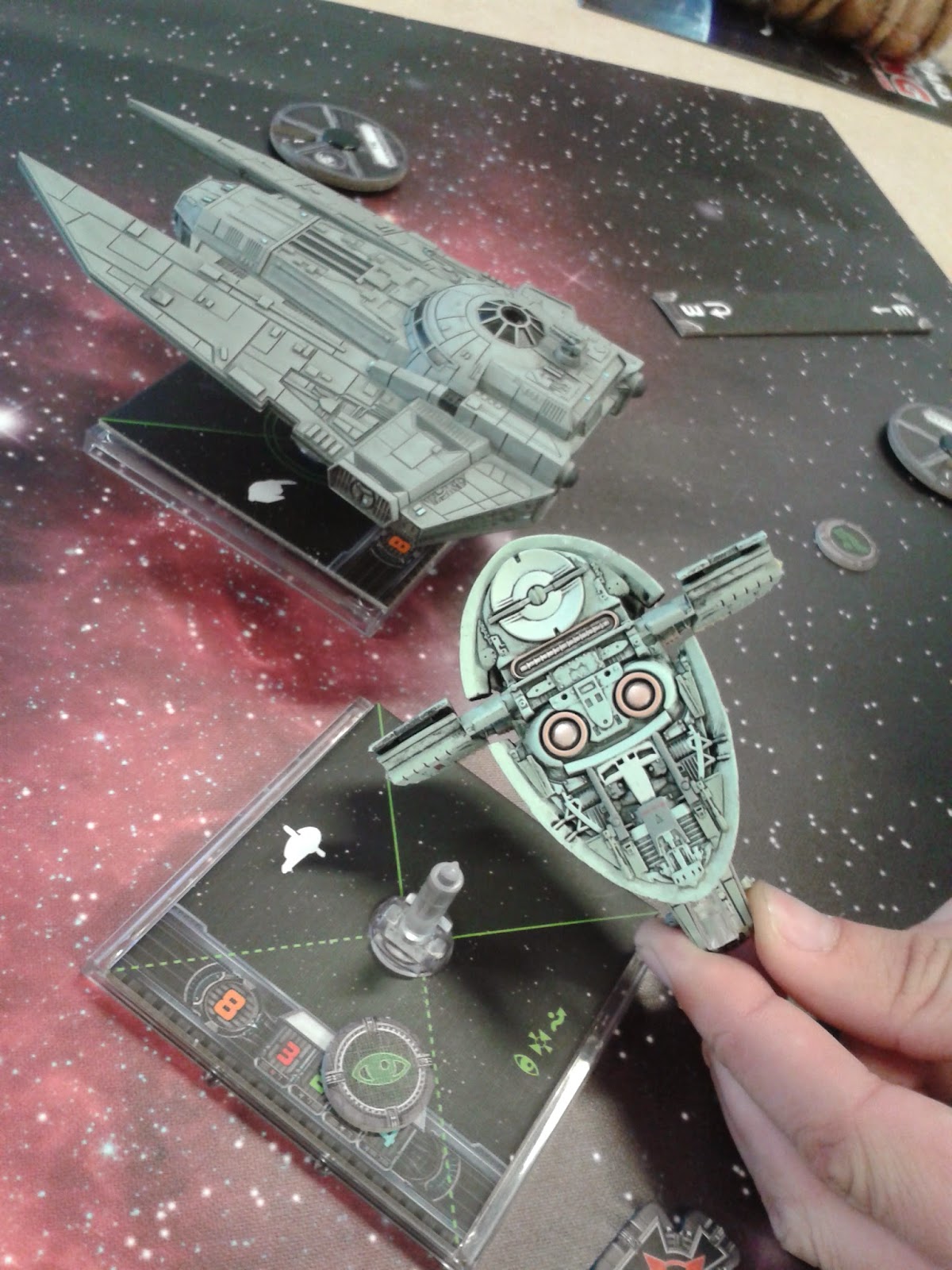 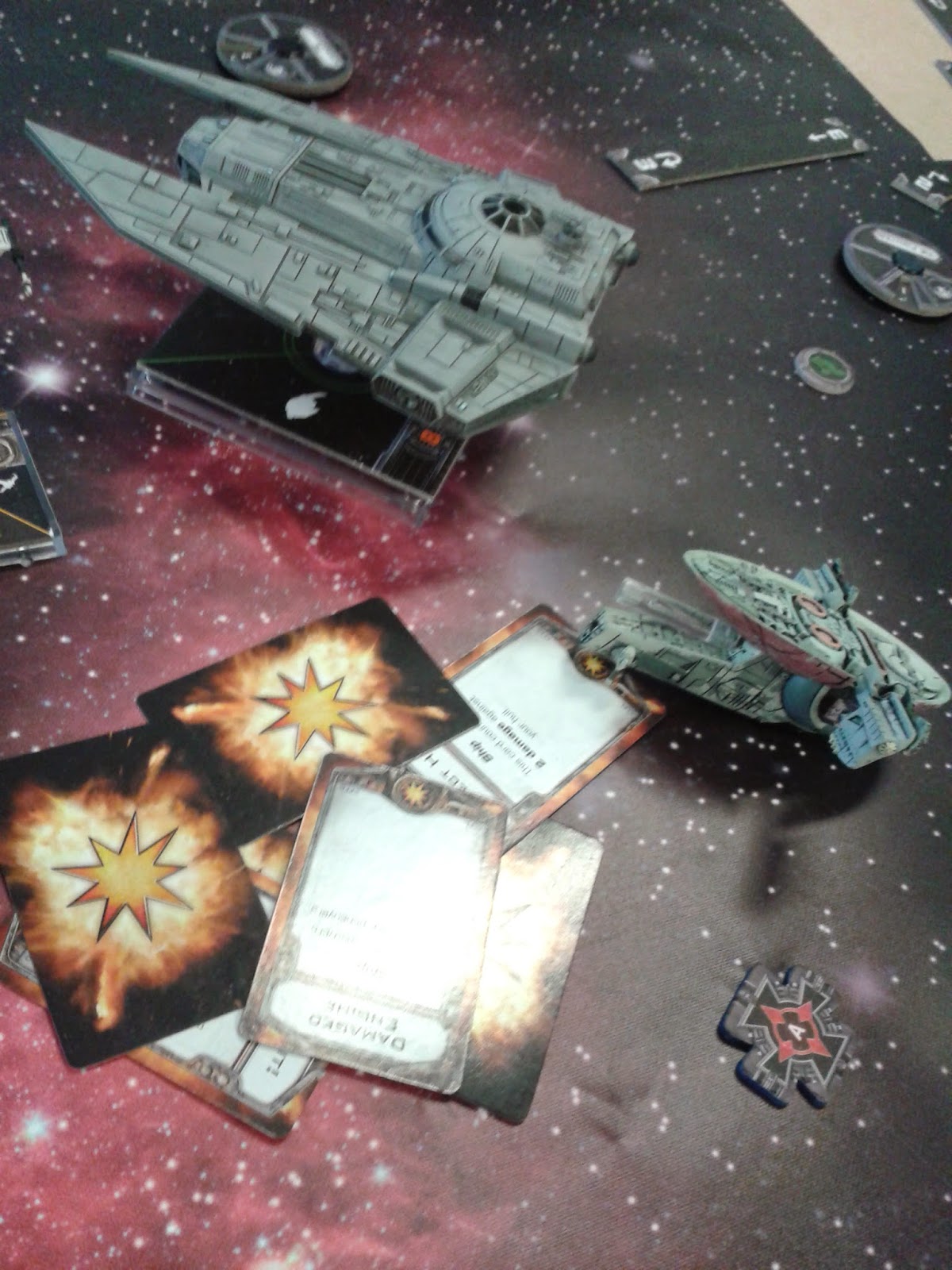 At which point the battery in my phone went flat.

I lost this one, but at least I took down the Devastator for 53 points. Though Darth inflicted the last hull point for the cost of one shield on my Zed!

Game three against Terence - my first win! (And probably my most entertaining opponent, though they were all top chaps) I lost Boba early after inflicting damage on an uncloaked Whisper, his TIE Phantom upon which he had rested many of his hopes. Gotta love Veteran Instincts on Boba! Then my remaining fighters took down Howlrunner and Terrance's three Academies.

Last game of the day against Alex and my first comprehensive win. I just lost an M3. Boba left the field unscathed. Gotta love those Boba re-rolls!

The M3's Mangler cannons chipped away at his Royal Guard Interceptors, and I finally made use of Boba's rear arc, though the Firespray kept running into Alex's ships and Boba was therefore unable to use actions most of the time! When I could use it, Boba's Recon Specialist [crew] worked well. Double focus' - one for attack, one for defence.

Overall I only used engine upgrade a couple of times, though it did give me the jump on Rear Admiral Chiraneau early in the second game, which aided his eventual destruction.

I think was getting better as the day progressed, as well as meeting chaps who were, perhaps, not!

But above all...a good time was had by all! A great time in point of fact. I thoroughly enjoyed all four games.