The Rescue of Orar Ergalo

A solo adventure for FFG's Star Wars Edge of the Empire RPG. 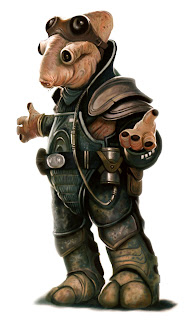 Now I could be modeling (those EA Persians ain't gonna paint themselves!), but, well, I sunk a bunch of money into Fantasy Flight Games' Star Wars Edge of the Empire RPG with the hope that it could be a bit of a regular thing with the small group that comes round home on Friday evenings.

'Cept, being winter and general busyness and all, they ain't been.

So, I thought I might try running a game solo, like, 'cause...I've always wanted to! I found RPGSolo.com, which has the capacity of not only coming up with some ideas but also has the ability to write an adventure log alongside it. In Text. I started doing just that, but, as I was fishing around for details to fill out the background, I found a good few pretty pictures that I could use, and, as I like pretty pictures...I've decided to journal my adventure here.

So, for those who are interested...The Rescue of Orar Ergalo. A work in progress.